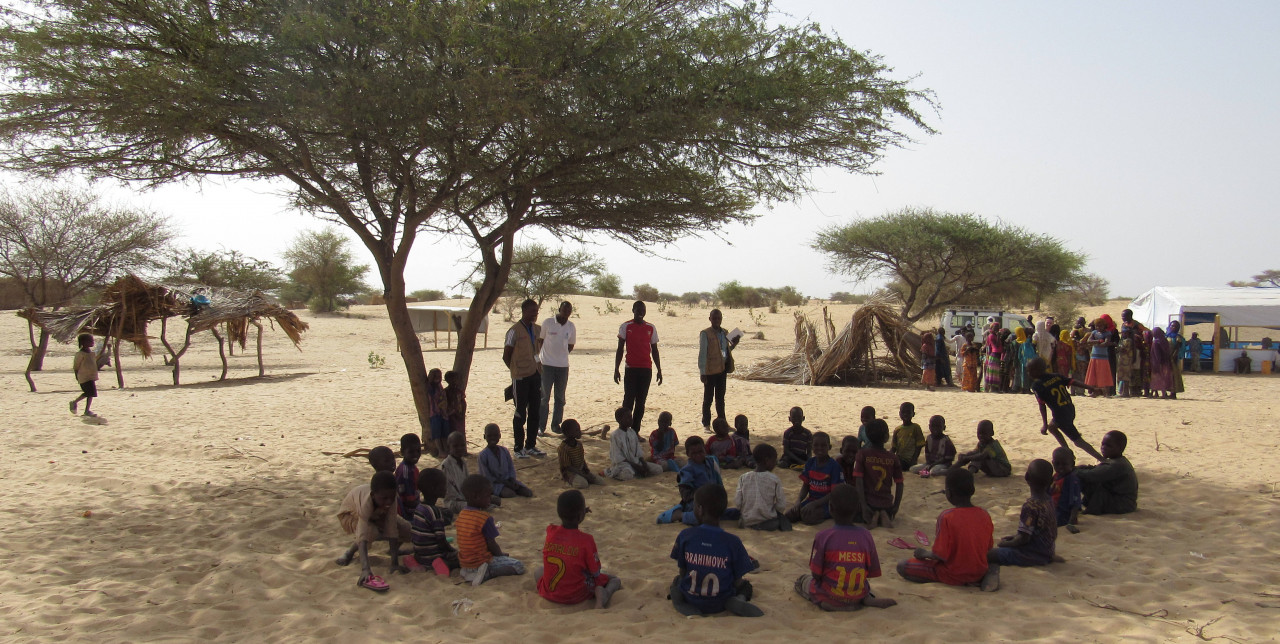 Below, we bring you the report by journalist Ottavia Spaggiari on her experience in Flatari, Chad, where COOPI is running a protection and psycho-social care project funded by OFDA/USAID . Original source: vita.it

Flatari, a sandy plain on the shores of Lake Chad, hosts over 700 families who have fled the terrorist group. With the help of COOPI, the only Italian NGO operating in the region, they are struggling to rebuild their lives and overcome the traumas of the conflict.

“We have lost everything, but here, at least, there is peace”. These are words that one hears repeatedly when walking among the straw huts of the refugee camp of Flatari, in Chad, a sandy plain a short distance from the shores of the Lake almost completely conquered by the desert, where to make oneself a few centimetres of shade is a tough challenge. In the last four years, thousands of refugees have arrived here, where the trees are sparse and the heat, although it is only March, is already unbearable, forced to suddenly flee their homes by the arrival of Boko Haram.

In 2014, the terrorist group began to increase its range beyond Nigeria, where it originated at the start of the twenty-first century, devastating entire villages and killing thousands of inhabitants in Niger, Cameroon and Chad as well. Disrupting the lives of some ten million people and forcing over 2.4 million to leave their homes, this is one of the world’s most severe humanitarian crises which has put seven million people at risk of food insecurity and 120 thousand at risk of famine. While living conditions in Flatari are extremely hard, the people here tell me that they feel safe. They are a few kilometres from Bol, a small town which, until recently, had barely six thousand inhabitants but, in the last four years, has taken in over 14,000 refugees, for the very reason that it is still considered safe from terrorist attacks.

The five thousand or so people who live in Flatari today originate from villages on the border between Niger and Nigeria and from the Lake’s islands, occupied by terrorists with the objective of regrouping in order to tackle the counter-offensive mounted by the Chadian army.

Marking the entrance to the Flatari camp, a faded sign indicates the humanitarian zone. Next to the World Food Programme logo is that of COOPI, the only Italian NGO operating in this part of Africa, committed to providing protection and psychological help for refugees.

“Here, there are people who have seen and suffered all kinds”, explains Freddy Bigabwa Birheganyi, COOPI’s head of psychological help for refugees. A clinical psychologist who graduated from the University of Simon Kimbangu in Kinshasa, in the Democratic Republic of Congo, Freddy has extensive experience of treating victims of trauma and violence. “There are adults and children who have seen members of their families die before their eyes. It’s inevitable that they still bear the marks of this violence”, he tells me, describing the project set up by COOPI. “On one hand, we do trauma processing work which involves the whole community, through individual and collective counselling sessions, and, on the other, we attend to the most severe cases by offering a genuine care service, also prescribing specific medications”, he explains, stressing the key role that has been played by so-called “community workers”, i.e. figures within the refugee community who speak French and, in addition to acting as translators for the majority of people who only speak the local languages, also function as a bridge between the NGO and the various members of the community. “As well as trauma processing, we also work on issues relating to gender-based violence and child protection”, Freddy continues. “For this reason, it’s crucial that we personally involve members of the community; these are genuine cultural and social changes that must be understood and interiorised”, he explains. “We’ve set out a path on gender-based violence, with the specific goal of helping both men and women to recognise violent behaviours. At times, women themselves don't recognise abuse for what it is, because they’ve lived in settings in which that is merely part of the dynamic between men and women. This is precisely why we need to raise people’s awareness, first and foremost”.

Bukar Usuman is one of the “agents protecteurs de communité”. Among the very few here who speak French, Usuman came to Flatari with his nine children and two wives, together with tens of other inhabitants of his village on the border with Nigeria, fleeing the Boko Haram attacks. “We escaped and, when we arrived in Flatari, some people began to behave strangely. There are people who seem as though their hearts have broken down ...”, he recounts, seeking to put into words the post-traumatic stress that has wrecked the lives of some people in the camp. “Many of us didn’t really know what mental illness was, and people were afraid. COOPI is helping us to understand”, he tells me. “If someone is unwell, we now know that we can report the case to the team of psychologists; we know, now, that there is a care service, thanks to which the unwell can be guided towards the most appropriate treatments. People are being helped. It’s an important step forward, and it’s not the only one. COOPI is educating us on many issues that we never used to talk about, most importantly that of child marriages”. Usuman explains that, together with the community, an awareness-raising path has been set out on this very issue and on the importance of sending children of both sexes to school. “As community workers, together with the village chiefs, we perform a protective function. If we see that there is abuse, violence or risk of child marriage, then we report it”.

While they may no longer have a village, those who played the role of community leader at home continue to do so here in the refugee camp. “In Flatari, four different ethnic groups coexist: Pel, Kanembou, Boudouma and Arabs”, Usuman continues. “The village chiefs make sure there are no problems between the different groups and, if a dispute does arise, they discuss it with the canton chief”. Sael Saidu is 56 and, at home, on the border with Nigeria, he was the village chief. Today, although he doesn’t know what remains of his village, conquered by Boko Haram tens and tens of kilometres away, his people continue to view him as a guide. Indeed, the inhabitants of his community, as well as his two wives and nine children, followed him in the long exodus that led him here. “We walked for days and days”, he tells me, under the scorching mid-morning sun. “We only stopped when we saw the armed forces of the military in the distance and knew that we were safe here”. He and his community have been here for three years. “It’s a hard life. The thing I miss most are my animals: I was a farmer. Without them, I have nothing left”. Yet, when I ask him if he ever thinks about going home, when the terrorism has ceased, he shakes his head decidedly. “Poverty is terrible and, here, we depend on humanitarian aid”, he continues, “but the journey here was far, far too hard”. He pauses, underlining that “far” as if seeking to express the unbearable weight of those days of walking, with neither food nor water. “We are here to stay”.

This is a common intention among the people living in Flatari. “For many, the refugee camp represents an important change in perspective”, explains Freddy, reflecting on the different faces that this sandy plain assumes for the refugees. For many people, it is a limbo through which they are obliged to haul the deep wounds left by Boko Haram. For others, it is a point from which to start again. “Many of these people lived in remote and isolated places. Finding themselves, for the first time, close to another populated area, meeting different people and having access to school are all things that are altering the direction of their lives, particularly for the youngest kids”.

Usuman, too, tells me he would never, ever, go back. “Here, we feel safe. Even if the danger of terrorism had passed, I would never return to my village. In Flatari, there is a school. We are illiterate, but our children are learning now”.