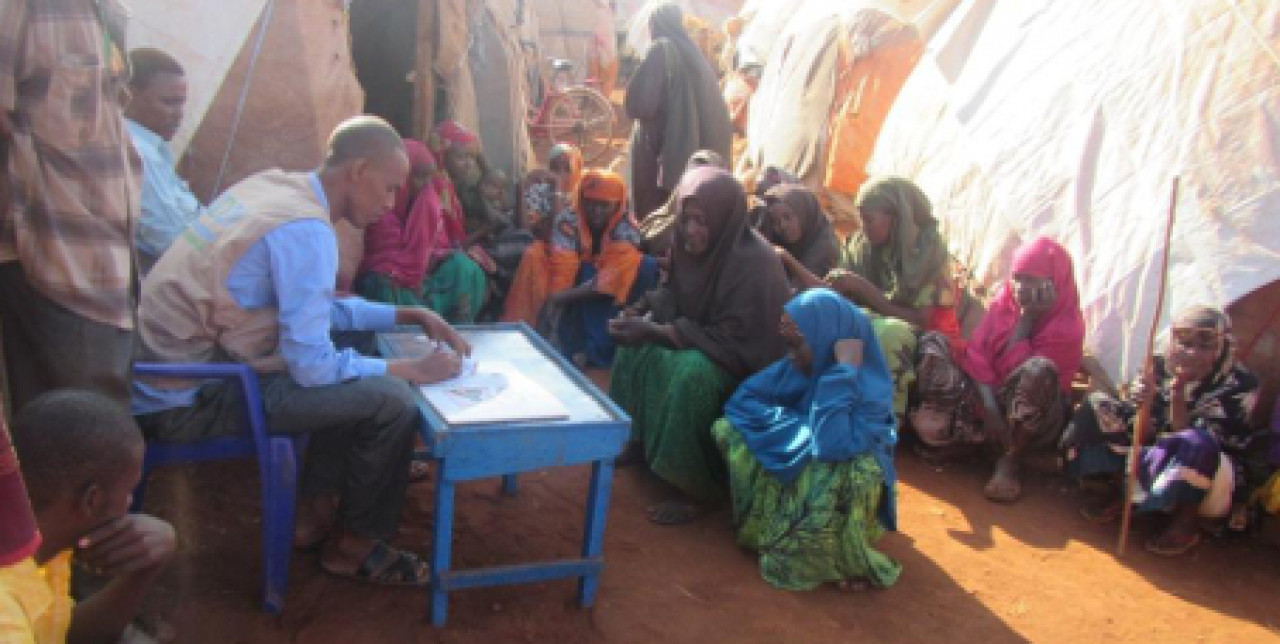 A trip through fields in Somalia

Caraturka is an area of Somalia that extends south of the city of Baidoa. In recent years it has become the region of the refugee camps: it has, in fact, 15 camps for IDPs, Internally Displaced Persons, the internally displaced people who have left their homes to escape conflict and violence, but remain within their nation state.

One of these camps is Deqalle, three kilometres from Baidoa, where about 200 families live, tested every day by the lack of drinking water and the lack of food and medical care. COOPI is present in Deqalle with two emergency projects and is responsible for distributing fresh and dried food, water, personal hygiene kits and mosquito nets.

Here is a testimony from the COOPI team in Baidoa.

"THANK YOU DAILY, ALLAH, FOR LEADING US TO THE CAMP."

It's a sunny Wednesday morning; we drive along a dusty road to Deqalle Camp. We organized ourselves to meet some of the camp's inhabitants, to do post-project interviews. The beneficiaries have been living in Deqalle since July: they fled their homes in the Bay and Bakool region after the resumption of the Al-shabaab attacks, when Somali militias occupied the area.

At the entrance to the camp, a group of women welcomes us: Fatuma, who fled the Bay region with her 4 children, Shiniya, Amina, Nuney and Seynab, who also live in the camp. After saying goodbye to her, we immediately begin the interviews.

For the interviews we follow our standard questionnaire and in 45 minutes we have finished the interviews. We are about to leave, when Fatuma stops us: "We consider ourselves lucky, we always thank Allah for bringing us here in Deqalle. We fled with our families leaving everything behind, we found ourselves empty-handed and COOPI gave us what we needed most: money, what we needed to wash ourselves and mosquito nets. Some of us used the money to pay Dugsi (the Koranic school), to buy food, medicines for our families and even clothes. We don't even want to imagine what would have happened to us and our children without your assistance and the help of the donor, who, they told me, is called ECHO".

In this and other ways we work in the camps and villages of Baidoa to improve the health and lives of thousands of children, men and women, such as Fatuma.

"NOW I RUN MY OWN BUSINESS"

It is late afternoon when, in the camp, the call for prayer is spreading. We approach a small bazaar. "Assalamu alaikum, staff of COOPI, and welcome to my shop," says Mr. Ali. Originally from Qasaxdhere, Ali lives at Allamagan camp in Baidoa.

We ask him to tell us about his family in Deqalle and how his experience with the COOPI project has been.

"When they resumed the fighting between Al Shabab and the government, I left Qasaxdhere with my wife Fatuma and my six children. In my village I was a charcoal burner, but here at the camp I can not continue with my activity. Most of that work is done in the suburbs, where most of the terrorists live. When COOPI came to bring assistance, fortunately I was selected as the beneficiary! With the first $80 grant I received from COOPI, I put on a table inside the camp to sell sweets and snacks; later, after receiving two more grants, I rented this little house and made it into a kiosk, where I sell food and other consumer goods. Now I have my own business and when I get a few occasional jobs my wife helps me manage the kiosk. Thanks to COOPI, my life and that of my family here in Deqalle has improved a lot and I have also managed to send my children to school.