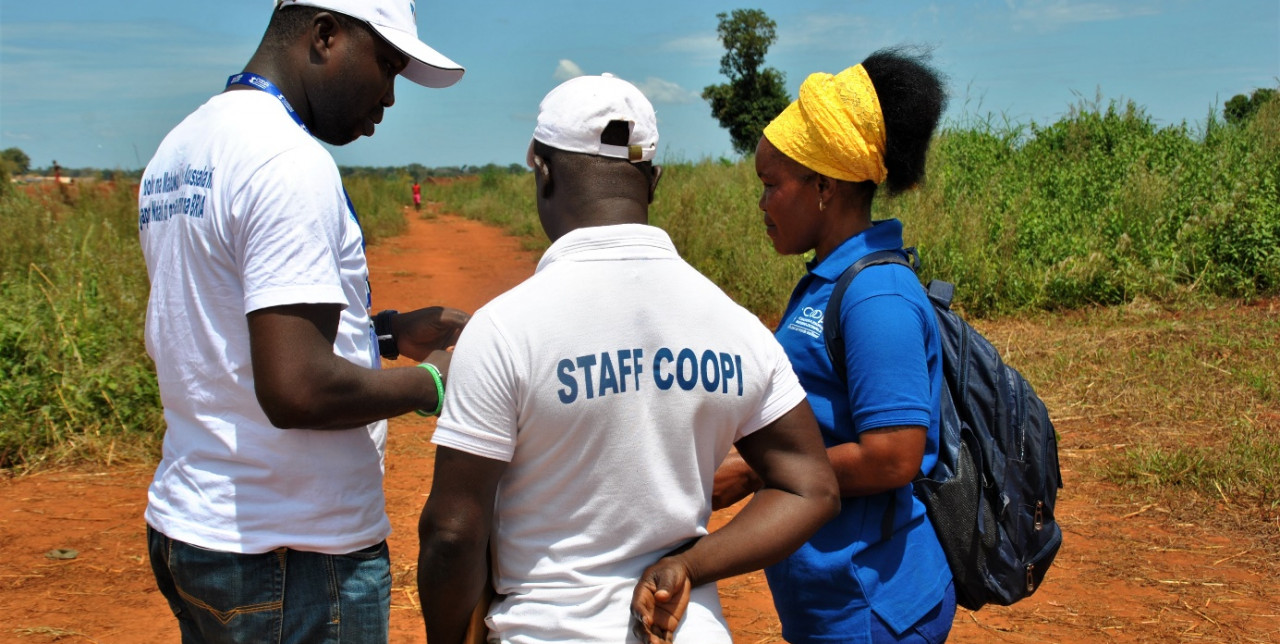 Bria is one of the most important towns in Haute-Kotto, the north-eastern region of the Central African Republic. Despite itself, it has become sadly famous for having been the scene of clashes between armed groups and massacres against the population, part of whom, exhausted and frightened, left the town in 2016, to take refuge on the site of PK3, where to this day it keeps surviving and being reached by other displaced people arriving from nearby towns.

Currently, the population of PK3 is estimated at 55 880 people. Alongside this and other smaller sites, the population living in the city is subjected to the control of armed groups - and so is PK3. It is here, in Bria, that COOPI carries out 4 projects to promote the food security and protection of the most vulnerable people, thanks to the funding of UNHCR (UN High Commissioner for Refugees), WFP (World Food Programme), the Humanitarian Fund and the European Union (Department of Humanitarian Aid and Civil Protection). 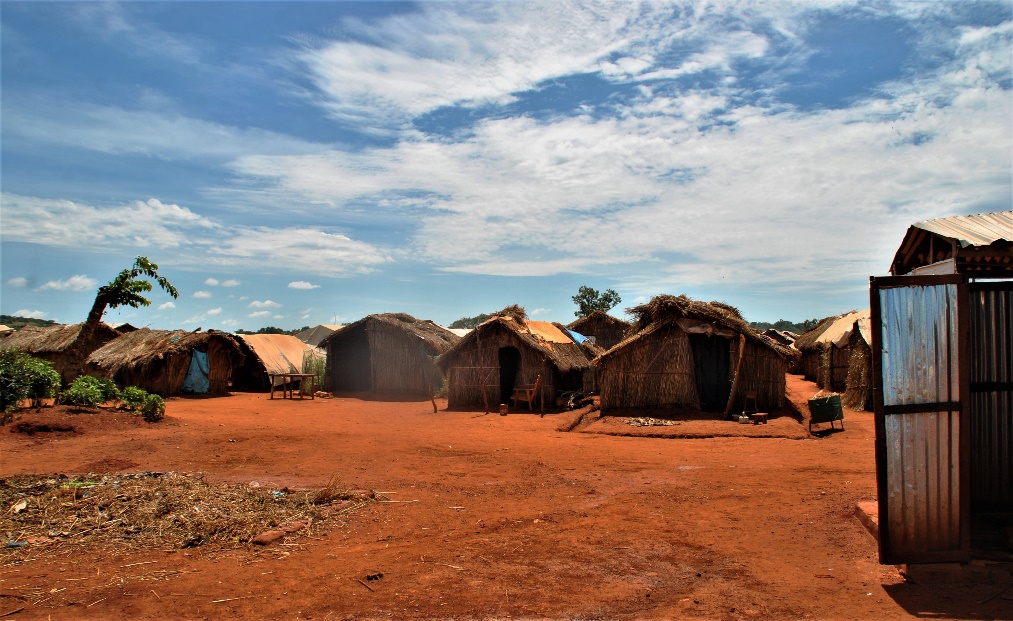 Along the stretch of track that leads from the city centre of Bria to PK3, it is easy to see abandoned houses that have been invaded by vegetation and destroyed by the passage of armed groups, in just two years. Looking more closely at this vegetation, however, it’s also possible to see small groups of people intent on removing the shrubs grown within the walls, to collect the fallen bricks not far away and to rebuild, timidly, what is their home.

In most cases, these are the inhabitants of the neighborhood, now displaced on the site of PK3, who - because of their condition of extreme vulnerability - are beneficiaries of the activities of COOPI, under the project funded by UNHCR. Through the monitoring and management of the PK3 site, our teams and the local community network - made up of block managers, Protection Committees and sector managers - are responsible for the registration first and then for taking charge of the protection incidents. Among the most common are gender-based violence (GBV), physical attacks, allegations of witchcraft, torture and even murder.

COOPI provides psycho-social support. For example, in GBV-related cases affecting mostly women, it intervenes by giving victims kits for self-care (accessories for personal hygiene, the pagne to make clothes), leading them in income-generating activities (through training and delivery of kits to start a small business) and ergo-therapeutic ones (crochet and saponification, for example), so as to facilitate their psycho-social recovery. These activities are carried out through two listening centres and two other facilities financed by the Humanitarian Fund, which guarantees us greater support in the GBV sector.

In a situation of conflict, movements are very limited (if not impossible): the town of Bria is surrounded by armed groups that move on all axes of access to the town, preventing the population to access the camps. As a result, the population - and in particular the displaced one – only has a small portion of land for farming at their disposal. COOPI, in partnership with the WFP, deals with the food distribution to the most vulnerable people, so that they can feed themselves quite regularly.

Resilience is the cornerstone for this town which fights this precarious situation with creativity, survival force and a spirit of adaptation, despite a distant and still uncertain return to normality. Among the wood and plastic sheets-made housing units of PK3, it’s possibile to find real laboratories of resilience and it is mainly women who manage these small activities: the preparation of cakes and scones is the most noticeable activity, along with small stalls of various objects, hairdressers and fixes-all.

Children run, play and joke... and thanks to the education in emergency project that COOPI implements with the European Union Humanitarian Aid Department (ECHO), they can go back to school. 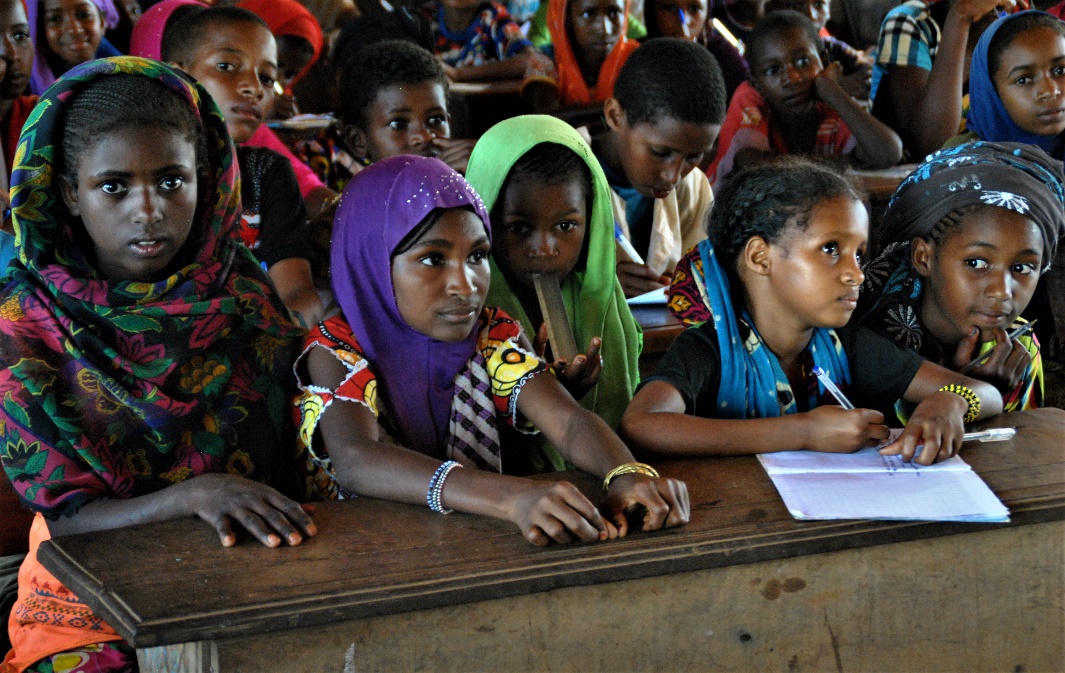 On the PK3 site we built hangars equipped with desks for pupils, blackboards, tables and chairs for teachers. Teachers are no longer there; they escaped during the crisis, which is why in one class there can be 150 children, all together, even following the lessons lying on the ground. Thanks to the European Union, COOPI is training new teachers with the purpose of giving them a job and providing quality education to children.

In Bria, education conveys through schools, which are reopened thanks to the presence of these new teachers as well as small rehabilitation interventions that COOPI is finalizing. Education also conveys through parents, who contribute to school good maintenance and environment safety, through maintenance activities in which they participate together with the teachers. In this way we can provide access to quality education for all children and young people today, but also for those who will leave the site of PK3 and return to their neighborhoods, one day.

COOPI implements these four projects looking at the past, present and future of the beneficiaries. The purpose so is that they can not only survive in a hostile environment, such as a site of displaced people or a city divided by the check-points of armed groups, but also that they can live a decent present, supporting them in their daily lives, today and tomorrow.