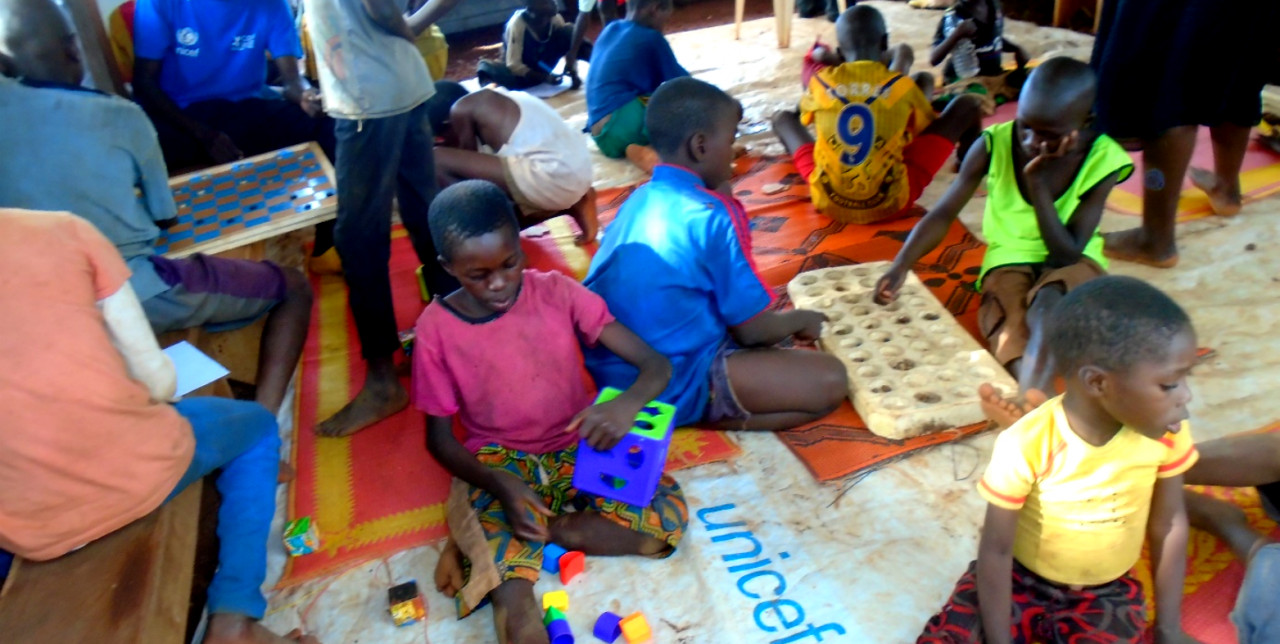 Almost 7,000 children (3,000 more than initially estimated) have benefited from psychosocial support in Zemio - prefecture of Haut-Mbomou, Central African Republic – thanks to the COOPI project "Improving access to childcare and protection services for populations affected by conflict" . Started in November 2017 until June 2018 and funded by UNICEF, it aims to provide protection to vulnerable children, i.e. those affected by the consequences of conflicts in the area, those associated with local armed groups and at risk of recruitment, unaccompanied minors residing in sites or communities.

To ensure a structured defence body and a safe place of protection, the project led to the establishment of an office calledRECOPE (Réseau Communautaire de Protection de l'Enfance, i.e. Network of Protection of Children at Community level) and of "Friendly areas for boys and girls" ( Espaces Amis d'Enfants).

The first - composed of 6 active members (3 women and 3 men) - has the role of promoting the participation and involvement of local communities in the promotion and protection of children's rights, both through prevention activities and referral to the relevant structures, and deals with it in the front line by raising awareness and informing communities, families and children about child protection, care services and possible appropriate responses. Thanks to the training provided during the project on protection issues, gender-based violence and psychological first aid, RECOPE members can now continue to guide children to care facilities if necessary even after the project has ended and without the support of COOPI.

In addition, the office identifies cases of abuse and violation of rights in order to transmit information to the relevant care structures; collects and transmits information on child protection and guidelines for effective responses and coordinates all follow-up actions for the reported subjects, including medical and psychosocial care by relevant structures, family reunification, school and economic reintegration. It is also a reference to know which procedures and guidelines to follow in case of abuses happening.

The four "Espaces Amis d'Enfants" - open in an equal number of Districts of the city - have been designed to host artistic, playful and recreational activities, but also psychosocial and medical assistance. Also from a community perspective, in order to mobilize other members to support activities in these spaces as well as to provide quality services within them, COOPI operators held two sessions on the risks related to child protection in emergency situations, at community level and in the reception facilities, moine by 44 members affiliated to RECOPE. 22 additional community members have also been trained on the profiles of children associated with the armed forces and groups, unaccompanied children, separated children, victims of sexual violence and sexual abuse and exploitation, as well as on the completion of identification, verification and documentation forms. Finally, two other sessions followed: the first on psychosocial support for children affected by armed conflicts through individual and group counselling, creative and recreational activities in spaces tailored to the context; the second on capacity building.

The implementation of the organizational and training measures mentioned above has resulted in substantial improvements for the situation of many young beneficiaries. Besides the aforementioned 7 thousand children, 12 (1 female, 11 male) who had left the armed groups were reunited with their families, while 72 victims of sexual violence, exploitation and abuse (25 female and 15 male) were able to benefit from identification, medical care and psychological assistance through the activities organized within the Friendly Areas.

Finally, 301 children (106 girls and 195 boys) related to armed group exerting self-defence were also identified and were made aware about their situation. Although the risk of recruitment should not be underestimated, following awareness sessions conducted by COOPI operators with community leaders in the Friendly Areas highlighted that many of these children had stopped carrying weapons and attending members of the self-defence groups.