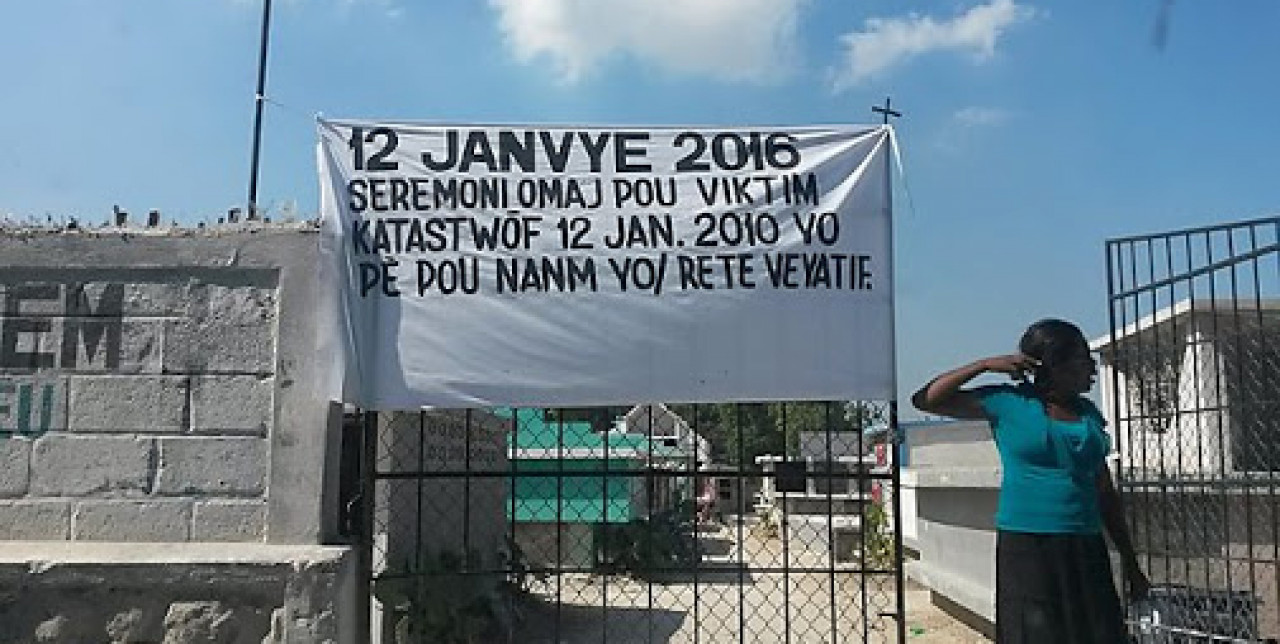 Interview with COOPI's innovative DRR partners in Haiti in occasion of the 6th anniversary of the earthquake.

On January 12, 2010 at 4:53 pm, a catastrophic earthquake struck Haiti. According to the International Red Cross and the UN, it affected more than 3 million people. COOPI is convinced that from the past, one can learn a lot for the future. Here an interview of Lara Palmisano, Communication Specialist for COOPI Haiti, with two members of the Haitian Alliance for Disaster Management and Business Continuity (AGERCA): Marie-Louise Augustin Russo, Board Advisor, and Sarah Taluy, Executive Director.

In your opinion, what were the main problems during the 2010 emergency interventions in Haiti?

Marie-Louise: The main problem was the lack of a solid National Emergency Plan and Disaster Risk Reduction (DRR) awareness among people. In fact, the Institutions, not having a clear action plan to follow in case of earthquake, did not know how to move. Communications were confused and delayed, and it was difficult to contact people around in the city. The population did not know how to react either, and some simple steps that could have been taken, were not. For example, many of the people that were outside when the earthquake occurred ran inside buildings to seek safety, and that was a big mistake that cost a lot of lives.

How are Haitian institutions working to solve these gaps and to work on Disaster Risk Reduction (DRR)?

Marie-Louise: First of all, the Civil Protection in collaboration with international organizations is reinforcing the National Emergency Plan and its structures, including the local and municipality level (CCPC, CLPC). Team leaders and Firemen have been trained for earthquake response, as well as community based intervention units (EIC) that are active now at the grassroots level.

Sarah: There are also many opportunities now for organizations working on DRR to get together, share their experiences and partner up to help projects be more successful. For example, forums are held monthly between those working in DRR where all organizations - Haitian and international - meet and share their projects, ask for suggestions and partnerships can be made. Many other structures have been put in place to ensure coherence in projects and the language of projects for DRR. For example, the Haitian DRR advocacy committee (CTESP) ensures that activities and materials produced for education and public awareness of the Haitian population uses appropriate language that beneficiaries can understand and identify with.

Why is DRR so important?

Sarah: DRR is important because many people's livelihoods, what it takes for them to secure the necessities of life, can be negatively impacted by a disaster. A disaster is anything that occurs suddenly and is beyond a person's or community's capacity to respond/react. A disaster is a break on what we perceive is our normal. So a severe drought and no access to water is a disaster for someone who depends on agriculture for their livelihoods. However, there are DRR measures that the agriculturalist could take in case of a drought, for instance a diversification of economic activities. DRR concerns everyone, from a child to an elderly, and on various levels. Firstly, on an individual level where personal security and livelihood are at risk. There is no such thing as zero risks, but DRR can help one reduce their exposure because once one is aware of a threat to their safety then there are steps or actions that can be taken. It is crucial to raise awareness of how to prevent a situation of disaster because it allows a population to be more resilient. It not only saves lives but it also protects people's sources of livelihood.

AGERCA has a peculiar role in DRR. How does it work?

Sarah Taluy: AGERCA was created in 2007 to involve the private sector in DRR and to bring their support to the national System of Disaster Risk Management (SNGRD). AGERCA advocates the importance of DRR, and of using measures such as Business Continuity Planning as beneficial to them and the country as a whole. Awareness among the population is another crucial part of AGERCA's work.

Marie-Louise: For example, since the beginning, we informed about risks and prevention and mitigation activities that can be taken at a personal and public level. In December 2009, for example, we held the third conference of that year with seismologists and engineers as speakers from Haiti and the USA to explain to population and institutions that Haiti sits in a seismic area, that an earthquake had to be expected and that there were some actions to be taken to reduce the loss of lives.

Sarah: Haiti being poor and having weak infrastructure needs all the help it can get and AGERCA brings together the private sector to help the SNGRD for a more resilient Country. For examples, by some of the projects that AGERCA is engaged with COOPI, it helps to promote a safer work environment for private sector institutions. Evacuation plans, DRR workshops and fire safety trainings are some of the measures that we work together to bring not only awareness but to make people safer.

How come is the role of the private sector important in DRR?

Marie-Louise: The private sector is an integral part of the community in many ways and meanings. And it should act consequently. When the 2010 earthquake happened, several private companies supported the population, and AGERCA mediated their activities. For example: BRANA, a big Haitian brewery provided water to a hospital; Voilà, a mobile company, built an IDPs camp; UNIBANK gave domes to a hospital; and so on.

Sarah: People depend on private sector for employment and the owners of businesses depend on their business for their livelihoods as well. If DRR measures are not taken into account by the private sector, it increases the likelihood that a disaster will force businesses into very difficult situations. Additionally if their staff are not aware of what to do at home or at work in a situation of disaster then that has repercussions on the business as well. DRR concerns everyone because it takes into account individual and personal safety but also the securing of one's livelihood. That is crucial when it comes to the private sector because DRR measures are a means for their institution to thrive and succeed despite the occurrence of 'disasters'.

Haiti remains very vulnerable to disasters. COOPI arrived during the 2010 earthquake emergency to support in humanitarian response and rescuing activities to the communities hit by the disaster. Today, COOPI is working in the scaling-up of the methodology approach of risk and crisis management in urban areas. An important aspect of the DRR project funded by DIPECHO and managed by the consortium COOPI-GOAL in Haiti is the partnership with AGERCA, a truly innovative network of Haitian businesses working to create a bridge between the private sector and the public to promote DRR and the continuity of socioeconomic activities after a disaster. COOPI and GOAL are also supporting some local institutions (civil protection, EIC) to better prepare for emergencies, implement a disaster risk management system, improve risk management and develop longer term projects that support recovery and sustainable development.