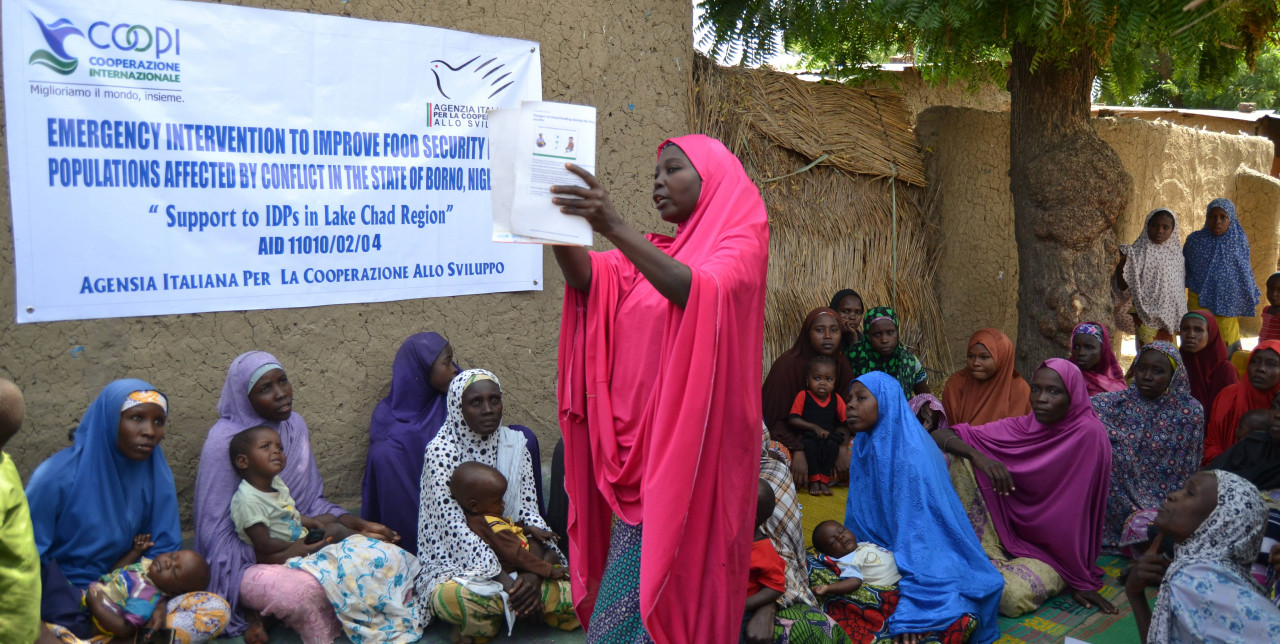 Since July 2017, COOPI has been carrying out a food security intervention, funded by AICS (the Italian Agency for Development Cooperation), with the aim to improve the life conditions of the internal displaced persons and of the receiving community in Borno State (Nigeria).

The first result expected from the project is to guarantee a sufficient amount of quality food to displaced, local and returning families, who have become vulnerable due to the violence inflicted by Boko Haram. In the beginning, the project planned to reach 560 families, but after a fact-finding survey the number rose to 700 units. Through an e-card system, the families received six transfers for purchasing food at selected retailers. Following is the monthly account of the activities carried out.

Identification and registration of the beneficiary families

During the first month of the project, meetings were organized at district level (CDO-Community Development Officer) with community leaders (bulama/Lawan) and SEMA’s representatives (State Emergency Management Agency). The meetings were necessary to illustrate the goals of the project and the criteria for selecting the recipient families. Subsequently, COOPI asked the community representatives to make a list of the most vulnerable families residing in the district of Ngamdu, on the basis of the vulnerability criteria laid down in the project. The proposed list was then discussed with the community through group consultations and modified, or in some cases confirmed, on the basis of the interviews conducted by COOPI’s personnel and data collectors.

During the distribution of the e-cards, the recipients were trained on the e-voucher mechanism and on their rights (free choice to purchase whatever food they preferred, possibility to negotiate the unit price with the retailers, access to specific channels for communicating any complaints).

During the month of July, a fact-finding survey was carried out on a sample of recipient families (103 families), in order to assess the food security indicators.

The survey highlighted that 91.7% of the recipient families had a food consumption index below the acceptable threshold (in 78.3% of the surveyed families the consumption profile resulted to be ‘poor’, an in 13.4% it was ‘borderline’).

In collaboration with the Ward Head and SEMA’s representative at district level (CDO), a preliminary list was prepared of all the potential retailers present in the community’s surroundings. Those identified were invited to express their interest in participating in the program. COOPI’s staff then proceeded in assessing the technical and financial skills of each retailer and of the food prices expected in the basket (on the basis of market prices). An agreement was signed between the 6 retailers selected, SEMA’s representative at district level (CDO) and the community representatives. The retailers participated in a training course on e-card management and e-voucher refund.

E-voucher transfers for the purchase of food

In the months of August, September, October, December 2017 and in January and February 2018, 6 transfers were carried out, one per each month. The last transfer was planned for the month of March.

In November, each family received an amount equal to 3,448 NGN (naria, the Nigerian currency) multiplied by the number of family members (for a maximum number of 10 members/family).

The transfer of 3,448 NGN per person is considered sufficient to guarantee 70% of the calorie needs per day (2100 Kcal/die each). The 70% covering of the daily need falls within the intervention strategy adopted by the World Food Program (WFP) and Coordination Groups (Food Security Working Group and Cash Working Group) and is shared by the majority of the NGOs operating in the sector of food aid in the North-East of Nigeria.

The retailers’ transactions and food prices are constantly monitored through the RedRose platform. COOPI’s personnel also carries out a monitoring activity at each retailers’ premises, on a monthly basis, 7-10 days after the occurred transfer. Besides, COOPI’s personnel analyses food market prices on a monthly basis, in order to verify that the prices applied by the retailers toward the recipients are in line.

An analysis of the food purchased, with reference to the first two transfers (August and September), highlights that the recipients purchase most frequently: imported rice (19.7% of the purchases), local rice (18.4%), corn (18%), spaghetti (7.6%), vegetable oil (6%). Fish, eggs, meat, milk and potatoes represent in average 3.6% of the food purchased.

The initiative, although of emergency, contributes in improving the economic conditions of the more vulnerable families who will thus be able to invest the economic resources spent purchasing food in activities that generate income. The initiative also contributes in the upturn of the local trade owing to the local retailers’ direct involvement in the aid transfer system.