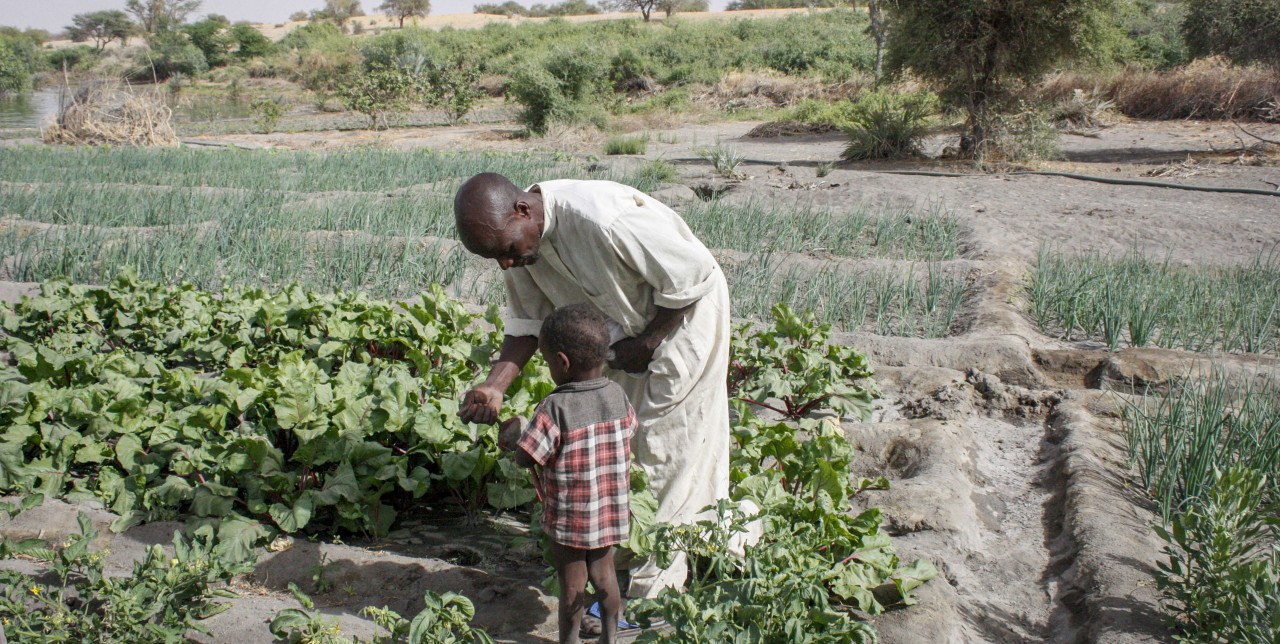 «Everything has changed. All this green didn’t use to exist. Up to not long ago, there was only sand». Abbakr Abbami smiles proudly. With one hand he is holding a hoe, while with the other he is pointing at the field in front of him, a few dozens of meters from Lake Chad. He is the president of one of the 40 groups of farmers supported by COOPI in this extremely poor area of Africa, where most of the Lake’s water has been devoured by the desert. Despite the situation, the fruits of the land - very difficult to grow in such an arid climate - are the only source of survival for those living here. In the last fifty years, the Lake has dried up by 90%, tragically reducing access to water: a desertification process that seems unstoppable. In the last year, the rain has decreased by 30%. According to Unicef, acute malnutrition in Chad is around 12.2%, while chronic malnutrition is about 36%.

The so-called “groupements” are forms of association among families with the aim to improve the agricultural production so as to create self-sufficiency and entrance on the market. «Each group is composed of 25 members, each member representing a family. We provided sowing seeds, tools, water systems and a continuous training to 40 groupements – 1,000 families - present in the area», says Fabio Castronovo, agronomist and COOPI’s person in charge of the food security project in Chad, funded by AICS (Italian Agency for Development Cooperation). In average, every family unit is composed of 6 people, which means that COOPI’s support to the local agriculture involves about 6 thousand people. A very complex challenge. «Some groupements where formed within the context of the project, others already existed but were not consolidated. Besides, the cultivated areas were very reduced», Castronovo explains. «Access to water is still a big obstacle. It has been difficult. We have suffered together with the recipients, but we are finally starting to see some results».

Abbami’s group chose to call itself “souffrance,” “sufferance,” because as he explains, «Farming is a very difficult work, you do not reap fruits without experiencing sufferance», yet things have improved. «Thanks to COOPI we now have motor pumps, owing to which we have finally been able to water vast parts of the fields ».

This innovation has changed not only the landscape, but also the dietary habits of hundreds of families, in a territory in which most of the people have difficulty eating more than once a day. «Now we eat more vegetables and we have corn to make flour. Our wives can make bread and gateau», Abbami continues, explaining that they finally have produce in excess which can be sold at the market. The proceeds allow to manage the vegetable gardens, to buy tools and new sowing seeds, to maintain the water system. An extremely exhausting but visible improvement, implemented by all the farmers we meet along the lakeside.

Yangou Mbodou Kourtourom is the president of a “mixed groupement,” composed of both men and women farmers. In a land where early marriages are still widely diffused, many families refuse to send girls to school. Indeed, the female condition is still strongly subordinate to men, and Kourtourom is among the few women to cover such an important role for the community.

«I was the one who came up with the idea seven years ago», she explains while sitting beside her vegetable garden. «I gathered all the farmers and organized the works, so they accepted me as the group’s representative. When the time came to elect the president, they voted for me, even if I am a woman», Kourtourom smiles and explains that she is forty years old and has eight children. «I married when I was sixteen years old. I have always farmed the land. It is very hard work, but in the last year things have improved. Thanks to COOPI, for the first time ever, we had access to training, certified sowing seeds and a water system, all things that make all the difference ». For Kourtourom the greatest difficulty remains the financial one. «There are costs for maintenance that have to be met and which are high for us. We are still struggling but, slowly, we hope to have more and more vegetables. What we are growing at the moment is sufficient to feed our families, but we want to reach the point where we have enough produce to start selling at the market , which would gives us the money we need to cover costs and water the land».

Kourtourom is not the only one to talk about financial difficulties.

For three years now, Abbak Khari Tahir has been president of another “ groupement” near the Lake. When arriving at his vegetable gardens, we are surprised. Coming down the sand dunes, a small plot of extremely green land suddenly appears, with farmers bent over the field and a stretch of water in the distance. It seems impossible for water to be a problem here.

«It is, it is», Tahir says, while the youngest of his eight children follows him in the field. «It is the most difficult thing. Thanks to COOPI we developed a water system that has enabled us to cultivate wider areas. Now we have enough produce for all of our families», he says, explaining though that he and the other farmers are still concerned. Along the water course that feeds the small lake beyond the vegetable gardens, three locks have been built and are controlled by the nearby village chiefs. «At the moment they are open, but they are thinking of blocking them. If they do, the lake will dry up and we will no longer have water for our vegetable gardens». For the farmers and their families this would not only mean the loss of work, but also of their only source of nourishment. «The alternative is to build two wells, but it is too expensive for us. We really hope that the village chiefs will decide not to block the water course, and in the meantime we are trying to organize ourselves ».

Looking at his vegetable garden , Tahir recollects all the progress made in the last year. «It is a daily battle», he says. «We take turns sending off animals, hippopotamus and gazelles, as they arrive and destroy everything. It has already happened. Water is not the only difficulty. But look, the vegetables continue to grow».

The importance of having a goat

In this very harsh land, even the smallest progress is celebrated, greeted as a sign of hope that things can improve laboriously.

Zara Abaktar is seventy years old and welcomes me in her mud and straw hut, in the small village of Kikina, where she lives with her sister and brother-in-law. «It is difficult to live here. There is no work. There is nothing», she explains. «The nicest thing though is that when do we have something, we share it with everybody».

Zara is among the recipients of another action of COOPI’s on food security, that provides for the assignment of 3 goats, a male and two females, to women in a state of particular vulnerability. «The children of the village take them to pasture. Usually, we manage to eat only once a day. The goats a very important for me. When there is no food, at least I have milk to drink», she explains, saying that she even gave her goats a name.

«Milk is a very nourishing product. The aim is to create a small farming, in time, so that the milk may be enough not only for consumption in the family, but may also be sold at the market», Castronovo explains. «The women involved in the project are 390 and 15% are displaced or returned women». Among them, there is Sophia Gharbah who lives a few huts away from Zara’s. Sophia is 25 years old and has four children. Her marriage, as that of many others, was an early one. «They made me marry when I was 13 years old», she says. Sophia arrived in Kikina with her husband and children, fleeing from a village on the border between Chad and Nigeria, attacked by Boko Haram. «We walked for three months, in search of peace. We left every time we felt in danger», she continues, telling us how when arriving, she did not speak the local language, but everybody helped her anyway. «They shared their food and helped us build a house».

She too received three goats from COOPI, a step forward that may seem minimum but that, she says, contributed in improving her condition, at least a bit. «Now we manage to eat twice a day and we have milk. And when there is not enough food, we at least have milk to drink, which is extremely important for the children».