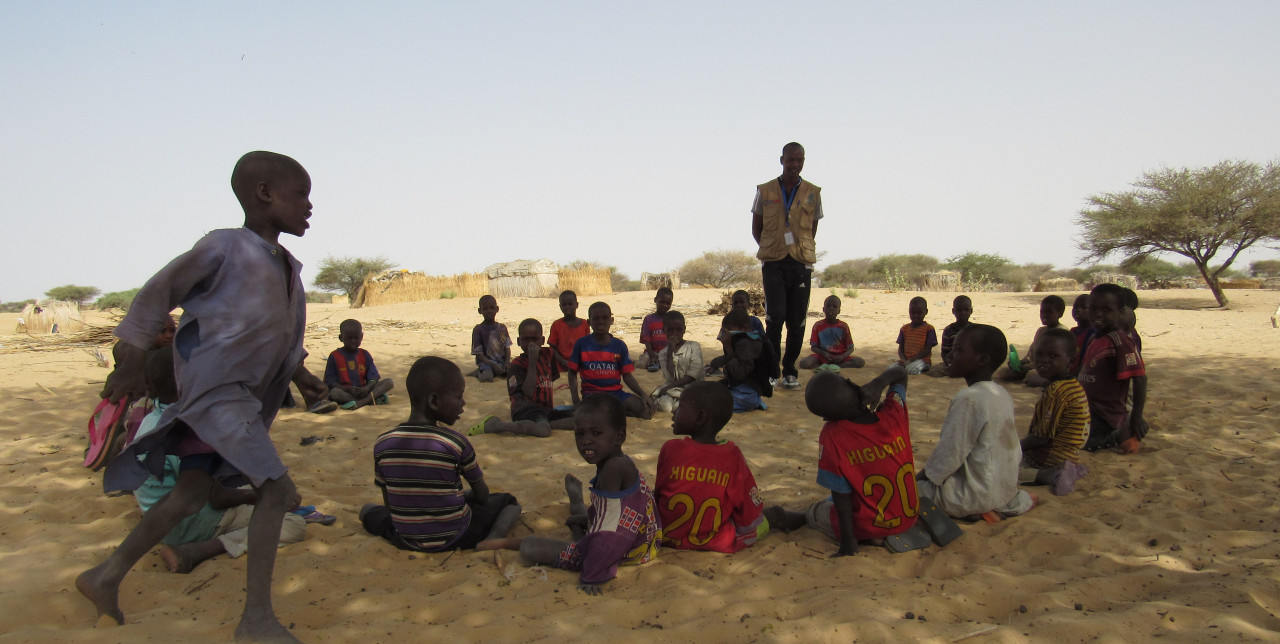 Lake Chad: when the refugee camp is also a place from which to restart

What follows is a report by journalist Ottavia Spaggiari on her experience in Chad, where she was able to visit the COOPI project financed by the EU Humanitarian Aid (ECHO). Source: vita.it, in Italian.

Kaya is a leveled stretch of sand near Lake Chad hosting more than 4 thousand refugees who fled from the violence of Boko Haram. Coopi is the only Italian NGO present in this territory, and offers psychological support, protection and an educational project that, for many children, represents the first opportunity to attend school.

Dozens of children of all ages gather under a big white tent in the centre of Kaya’s refugee camp. A few metres away, a very dry plain is the only trace left of what used to be part of the bed of Lake Chad.

In fact, in the last fifty years this water basin has undergone a devastating desertification process that has reduced the lake by 90%, transforming what used to be a lake basin an expanse of sand, inhabitated only by straw and mud huts. We are at a 15 minute jeep-ride from Bol, one of the main towns in the Region of Lake Chad, which however is extremely isolated.

Up to a few years ago, Bol counted barely 6 thousand inhabitants, but since 2014 the city and the nearby areas have become home to 14 thousand internally displaced persons. They come from the islands and the areas bordering Niger and Nigeria, fleeing from the violence of Boko Haram, the terrorist group that in the last four years has been taking control of entire villages between Chad, Cameroon, Niger and Nigeria.

The straw and mud huts give Kaya the aspect of a rural although settled context, to the point that you forget that you are in the middle of a refugee camp. In fact, around 700 families – about 4,200 people – live here having fled from the athrocities of the terrorist group.

This is one of the over 100 camps present in Chad, one of the 9 in which COOPI is directly involved, the only Italian NGO in this area. COOPI has developed projects devoted to food security, psychological support to Boko Haram survivors as well as an initiative aimed at protection and education in Kaya.

In the morning, the big white tent is used as a school, while in the afternoon it becomes a place where the children can gather and have fun. However, they are also followed by a team of psychologists and operators, who observe them while they are busy at drawing and coloring. «They fled from indescribable attacks and violences. They have seen all sorts of things, some have lost relatives, friends», says Charlot Dabra Serfebe, psychologist and person in charge of the program, highlighting that drawing and games help them identify possible traumas or situations of distress. «A lot of things can be understood on the basis of what they draw and the colors they use. These tools help the children express their emotional status and we can understand if there are any traumas, any anxieties». The operators explain that carefully looking beyond the drawings and the colors used, it is possible to identify who needs help. Then, the most appropriate forms of support are provided: counselling, medical assistance or psychological support.

«The most common distress is linked to post-traumatic stress caused by the violences suffered during Boko Haram’s attacks», Serfebe explains.

«The most used tool in these cases is counselling, very fit in an emergency context such as this, in which people need to have access to practical help in order to recover from traumas in a short timeframe», he continues, specifying that COOPI’s support is offered not only to minors, but to the entire community. «Actually the protection project involves everyone», because, he emphasizes, there cannot be a truly safe place without the raising of awareness and mobilization of the entire community. It is for this reason that the NGO supported the creation of community protection groups in the different camps, raising awareness among adults on the most critical themes, from post-traumatic stress disorders, to gender-based violence, to child marriages.

«These groups are composed of men and women, in equal amount, whose task is to watch over the community and refer to us operators if they identify any cases of violence on minors or women», Serfebe explains. «To date, we have taken in charge 102 situations, which in 95% of the cases involved children, mostly suffering from post-traumatic disorders and child marriages».

The big white tent is thus transformed into a place where it is possible to work through grief, the loss of dear ones and traumas due to violences. According to Charlot Dabra Serfebe, this white tent in the middle of the desert is also a place from which it is possible to restart, to rebuild laborously a different life from what was left behind in those lost villages taken over by Boko Haram.

«In the afternoon, we carry out psycho-social activities, but in the morning this is where the children have their lessons. They learn how to read, write and count». This is where French is taught, the official language in Chad, that however almost no one in the adult population in Kaya knows because, I am told, most of the refugees come from rural and remote areas.

The fact of having a school within the community represents an unexpected benefit for many families. «At the moment we have a seating capacity of sixty children, but we continue to receive requests for insertion. Parents want to send their children to school. Many of them used to live in areas where there was no school. For many families this is the first possibility ever to send their children to school, and they understand that it is a precious resource», Serfebe continues, telling me about the very harsh conditions in which the people here are obliged to live: difficult access to water, unbearable temperatures that reach fifty degrees in the summer, extreme poverty. Moreover, it is a population that in the villages of provenance used to be mainly breeders and farmers and that today do not have any animals to breed or any fields to cultivate. Plus, they live under the burden of what they have lost and the violences suffered. «Life conditions are extremely difficult», Serfebe concludes. «Nonetheless, unexpectedly, this is also a place from which to restart. This is why the projects devoted to support and education are so important».