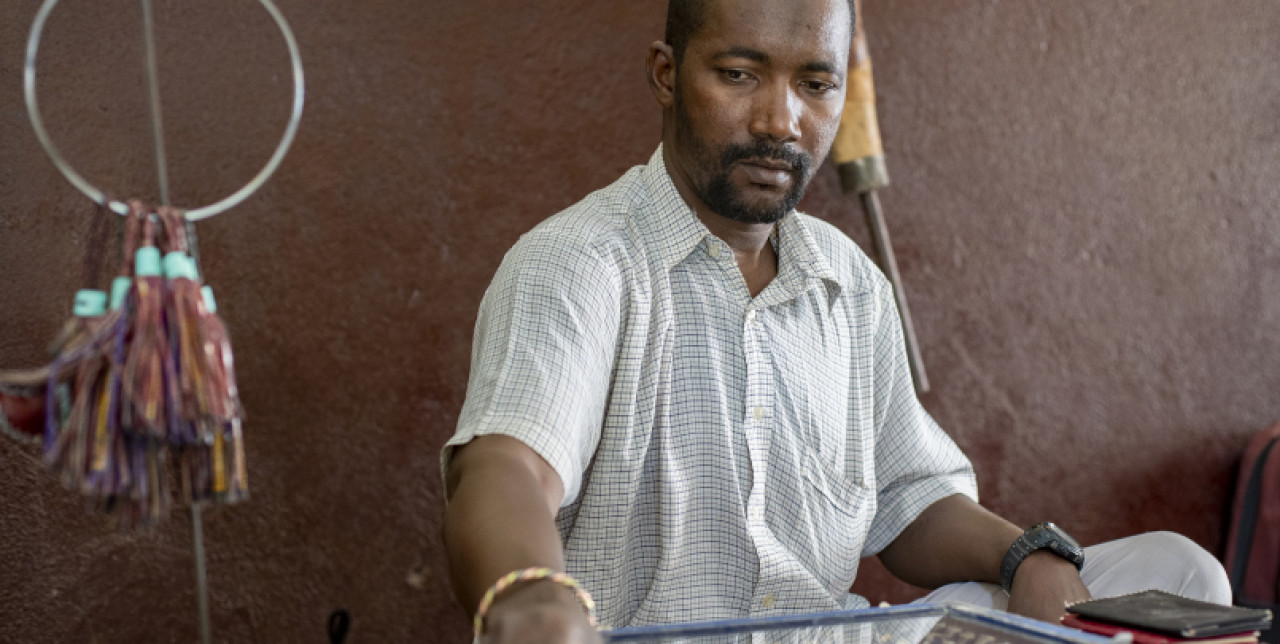 In Milan, from 4 to 12 December, Fiera dell'Artigianato (Crafts Fair) took place, an annual appointment that every year brings authentic products from all over the world to the metropolitan city of Milan.

This year COOPI - Cooperazione Internazionale also participated by holding a stand in the framework of the project "Boosting Entrepreneurship: AGadez for Innovation and Business Creation RE-AGIRE", financed by the European Union through the Italian Agency for Development Cooperation.

An absolute novelty for COOPI, which had the opportunity to introduce one of the many projects it has active in Niger, whose objective is to create economic and social stability in the region of Agadez, through the implementation of an ecosystem that favours the development of SMEs (Small and Medium Enterprises).

Moreover, despite the challenging times, this year's exhibition was attended by 1,800 artisans, 7 pavilions, 80 countries represented and for the first time in 25 editions, Niger was among these 80 countries.

The success and the questions asked during the 10-day event were remarkable. The peculiarities of the different products once told, thanks also to the presence of Tuareg craftsman Tana Rhissa, made the products themselves even more unique than they already were. The visitors' attention was captured by the artefacts on display on two tables richly decorated with traditional fabrics, as the testimonies of two visitors show:

"It was very interesting to find Niger at the 2021 Fiera dell'Artigianato! I visit it every year and it is the first time I have been able to discover Niger's products. I supported the project by buying an emiskini, a traditional Tuareg knife with different points used by the women of the desert for cooking, healing small wounds and removing thorns. A meaningful and unique object!” Lucia, 58 years old.

"I am very sympathetic to the issues of immigration and the problems of Africa, I consider them central to international policies, and therefore everything that is done to promote African societies finds my full approval. I am fascinated by the art that this land produces, and I really appreciate COOPI's commitment to supporting women and men artisans. I supported the project by buying a scarf and a straw bag made by a Nigerien woman. [...] I was happy to contribute to this project, which I hope will bring good results." Mariarosa, 43 years old. 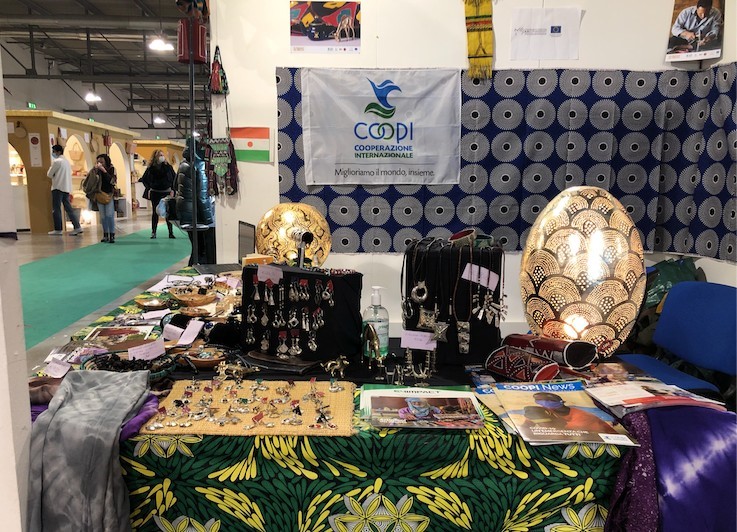 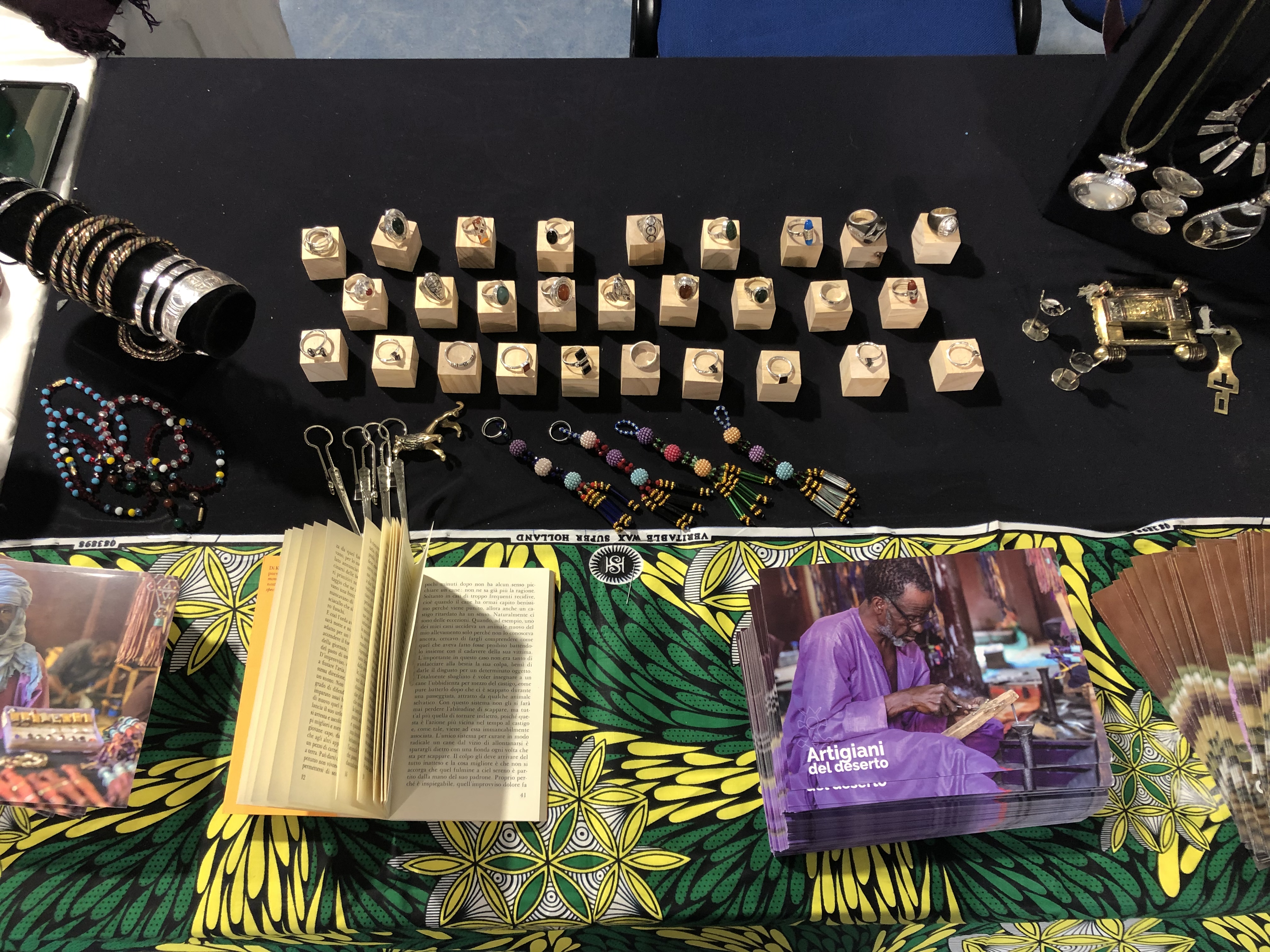 Many people were interested in traditional Tuareg handicrafts, which they had already encountered on trips or at festivals, and through which they wanted to expand their collections or make gifts that had a story behind them and were unique.

"I travelled to Agadez in the 1990s and got to know this magical land; it was a pleasure to see Niger again at the Fiera dell'Artigianato and to be able to travel a bit with my imagination thanks to the stories of the craftsman present. I really appreciate COOPI's work in the social field and I hope it will support similar initiatives more often." Antonio, 61 years old.

There was also considerable interest from people of all ages in the activities COOPI has around the world and in Italy, as well as all sorts of questions about Niger, and the Agadez region for which many expressed their curiosity.

"I was very intrigued by the presence of the craftsman who made the jewellery to understand the effort made by these artisans. I don't think they have great tools, but I notice that they work with great skill. It was interesting to talk to the girls running the stall, who managed to tell me in a few words about the project that COOPI is carrying out, and I had a very good impression." Gabriella, 56 years old.

"I am a fan of jewellery and exchanging views with the artisan was very nice. I supported the project by buying a silver necklace and I really appreciated the craftsman's explanation of the meaning of the various engravings." Lorenzo, 25 years old.

These ten days of the fair, with more than 600,000 visitors, were certainly a great opportunity for Niger, a country that is spoken about too little but which does not deserve attention. In addition, COOPI, which has been present in the country since 2012, gave Nigerian artisans the opportunity to have their authenticity recognised by exhibiting their products and demonstrating the process of creating jewellery.