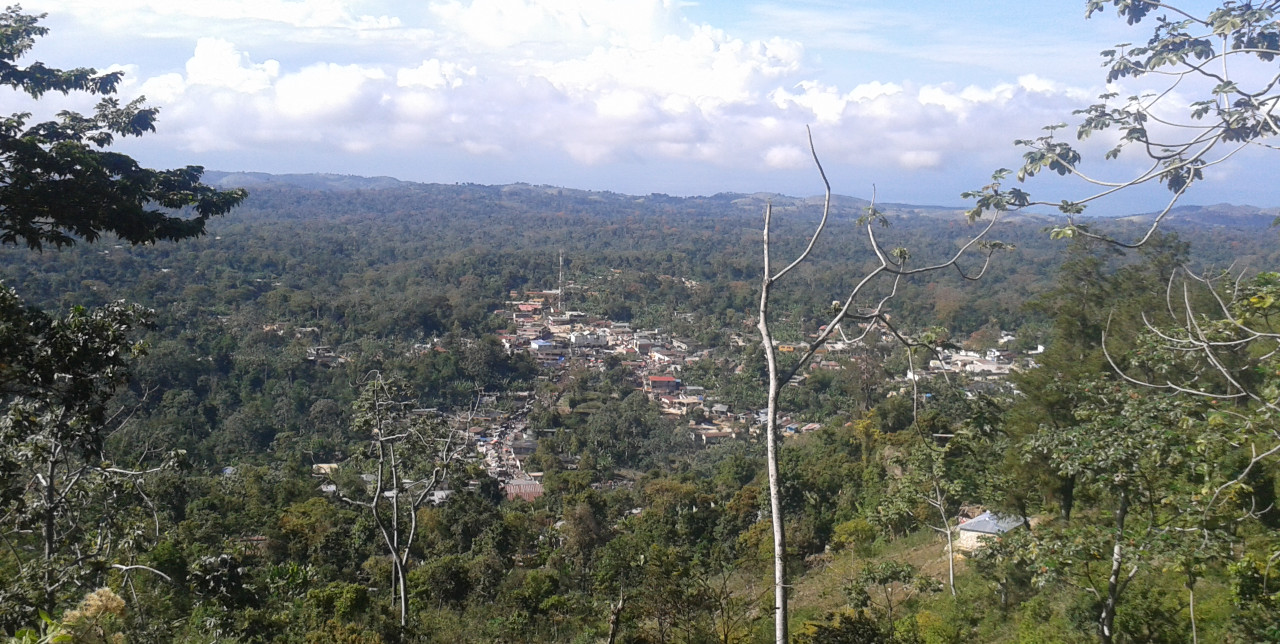 Following the acute drought that hit the South-East Department of Haiti in 2015, COOPI (leader of the consortium with Alianza por la Solidaridad and HelpAge International) takes action in Thiotte and Anse-à-Pitres neighborhoods with the project "Improving resilience to drought of local actors and most vulnerable rural families in the eastern part of the South-East Department of Haiti", funded by ECHO.

On March 8th, a Tuesday morning, I found myself in Thiotte. Two dirt roads, a market, a few buildings, some small houses shrouded in the fog of Haitian mountains. That day, the atmosphere around was so mysterious that I felt projected into the set of "Jurassic Park" movie. Enchanted, I ventured into the narrow streets of the village towards the town hall, where I had an appointment with Ms. Magalie Bretoux, representative of the Municipal Civil Protection Committee (CCPC) and very active in promoting better conditions in women's lives. Since the Civil Protection is our partner, I was invited to take part in the workshop on the occasion of the International Women's Day.

While I was walking, I noticed something different. In the streets, there were no ladies with big baskets on their heads full of fruit, vegetables, bread, and clothing, and in the distance I could hear a music that seemed to give the rhythm to my steps becoming louder and louder "Mwen if yon fanm kap chèche equality, mwen if yon fanm m Genyen diyite!" [1]. Ms. Bretoux led me not far from the town hall, in the Community Communication Centre (CCC). In a meeting room, fifty women in purple and yellow t-shirts were singing and dancing with an energy and a strength which was impossible to resist. Within a few seconds, I found myself at the center of the room, trying to follow the words and the dance.

The workshop was organized by the Movement of Belle Anse District Women (MOFAB), a local organization, which fights for giving women the right to education, health and justice, and for putting an end to gender discrimination. MOFAB prepared a training day on the history of this important date and on all the fundamental human rights, which are still too often denied to women. In turn, Ms. Gracilia Haudeus, Coordinator of the Movement, Mrs. Magalie Bretoux and Mrs. Roselene Gilot of the Civil Protection has spoken passionately about the protests, which take place around the world, to declare the claims that women have been carrying out for centuries.

The organizers have encouraged the participants to think about the status of women in their villages and to reconsider the discriminations between girls and boys. They blamed the society of creating inequalities and considering women as inferior beings. Hence, MOFAB is there to support the inhabitants of the district to raise their voices and fight for the recognition and respect of their rights.

After all these militant speeches, the atmosphere in the room was lively. The guests were sharing their personal stories while the smell of rice and pressed bananas spread quickly, recalling that it was almost lunch time. "If poutet his ke Jodia the nou, pendan nap chèche Kouraj ak diyite" [2], started to sing the organizers not to lose the attention of the guests. Hence, while the women started again their lively dance, I left the room to continue my meetings and visits.

Later, during a walk in the village, I found myself in the nearby of a water source. Steep and slippery, the path to reach this vital place is long and dangerous. Many women were taking this road with heavy cans filled with water on their heads. Their eyes showed the tiredness of a lifetime spent at the service of men. Alongside, a group of boys was laughing and playing around their motorcycles while the radio was playing some kompa. None of them thought about helping women to carry the cans, it was not their task.

I think back to the energy and enthusiasm of all those women gathered together to learn more about their rights and change their lives. I think that the path to reach gender equality is still long and complicated, but the action of MOFAB in the area and its initiatives to raise awareness give us the hope that "nan bed pou yo ap bank jistis fanm jwenn libète" [3].

[1] "I am a woman looking for equality, I am a woman who earns her dignity"
[2] "This is why we are here today, to look for courage and dignity"
[3] "In the fight for justice, women will manage to gain their freedom"