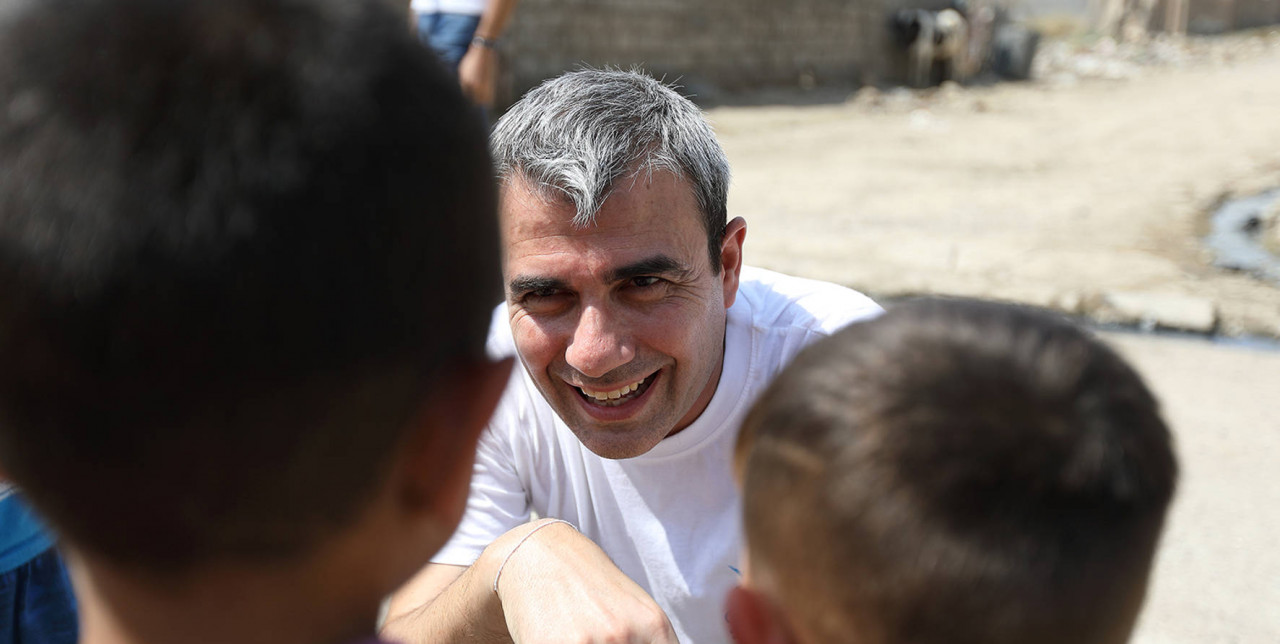 Education in emergency, psychological support and removal of anti-personnel landmines: Marco Loiodice, COOPI’s Area Manager in the Middle East, talks about COOPI’s three areas of intervention in Iraq (financed by AICS, the Italian Agency for Development Cooperation) in an interview carried out by Jolanda Pupillo for SBS radio.

The situation in the area remains dramatic: although the conflict was officially declared ended last summer with the liberation of the capital, Mosul, the affected population in the surrounding area is in need of humanitarian aid and of interventions aimed at restoring buildings, houses and, last but not least, schools.

Hi Marco. Could you give us an overview of the political situation in Iraq?
From the Seventies on, Iraq has experienced very few moments of ceasefire, with no exceptions in the last period. In September 2017, the referendum held by the Kurdistan Region of Iraq asking for independence from Baghdad received an exceptionally high turnout as a large number of Kurds took part in the vote. Unfortunately, Baghdad did not recognize the referendum, leading to a series of tensions among the various ethnic groups on the territory.

How does all this affect the population?
As known, this conflict is characterized by a regional crisis that extends from Syria to Iraq with ISIS occupation from 2013 to 2017. With territories and villages occupied, the population have no other option but to keep their heads down and accept the situation, which often is violent. The consequences are serious also for the children: they have to go to school, but there are no toilet facilities and there is a lack of education.

Tell us about “Help a Warrior.” Who are these “warriors”?
HAW is a campaign aimed at supporting COOPI’s humanitarian project in various Countries, paying particular attention to the so-called “education in emergency.” These children are defined “warriors” because every day, in order to reach their schools, they have to fight. People in Niger and Iraq do not have the money to pay transportation to go to school and to buy school uniforms. In Iraq, the streets leading to schools are even mined. Therefore, we foster special activities in school related to these crises, providing lessons on the risk of anti-personnel landmines: children learn how to recognize the risk and how to stay away from it, for example when going to school. As it is, they are normally obliged to slalom amid the debris and quagmire caused by the destroyed streets and buildings (among which often schools). It is a daily battle for them to reach their schools, which is something they really want to do, but they need our help.

How do your temporary schools work?
We started installing temporary schools in 2017 in four areas south of Mosul, in a district called Qayaarah. Basically, they are containers that allow a quick installation right next to the roofless and destroyed schools under reconstruction, toward which we are also contributing. This project has enabled us to offer immediate school services to 1,200 “young warriors” who, after years of denied access to school, now have a place for immediate protection. Besides, we are able to understand who has psychological needs and to intervene accordingly. We also provide teachers and educators with school material and special information (such as the specific info on anti-personnel landmines). Through this project we are providing an immediate stopgap with long-term goals, giving children better alternatives to recruitment in some type of army while growing up.

Are there any girls in the schools?
Great question. Thanks for asking. This is a fundamental aspect for us: we carry out special activities both for little and young girls. These are sensible themes in the area. For example, we have to pay particular attention when installing toilet facilities by properly separating boys from girls and making sure that the girls’ facilities are protected from the risk of indiscrete looks and violence. Plus, we have to do the same for vulnerable individuals such as children with disabilities, which often are the direct cause of the armed conflict.

Does going to school help the children feel like they are living in an apparent normality?
It seems so: when they are at school they seem to be immediately projected into a new and better world than the one in which they were living during the previous months. Of course, there are deep traumas that require specialized therapies. However, among the various activities organized in the schools, games have a double purpose, as they give the children both the possibility to relieve their feelings and express their creativity. Hunger has to do not only with the need of food, but also with the need of knowledge and to express oneself. For example, the students were given the possibility to color the grey containers producing a wonderful final result. These kind of activities allow the children to express themselves in school and bring out their talents which would otherwise remain undiscovered.

Does the population have hope for Iraq’s future?
The Country and the region are torn to pieces by conflicts that seem eternal. Our constant hope is that solutions will be found, and we put that hope into practice through training, schooling and psychosocial support. Basically, along the lines of what Mandela used to say, we believe that education is the most powerful weapon which you can put in children’s hands.