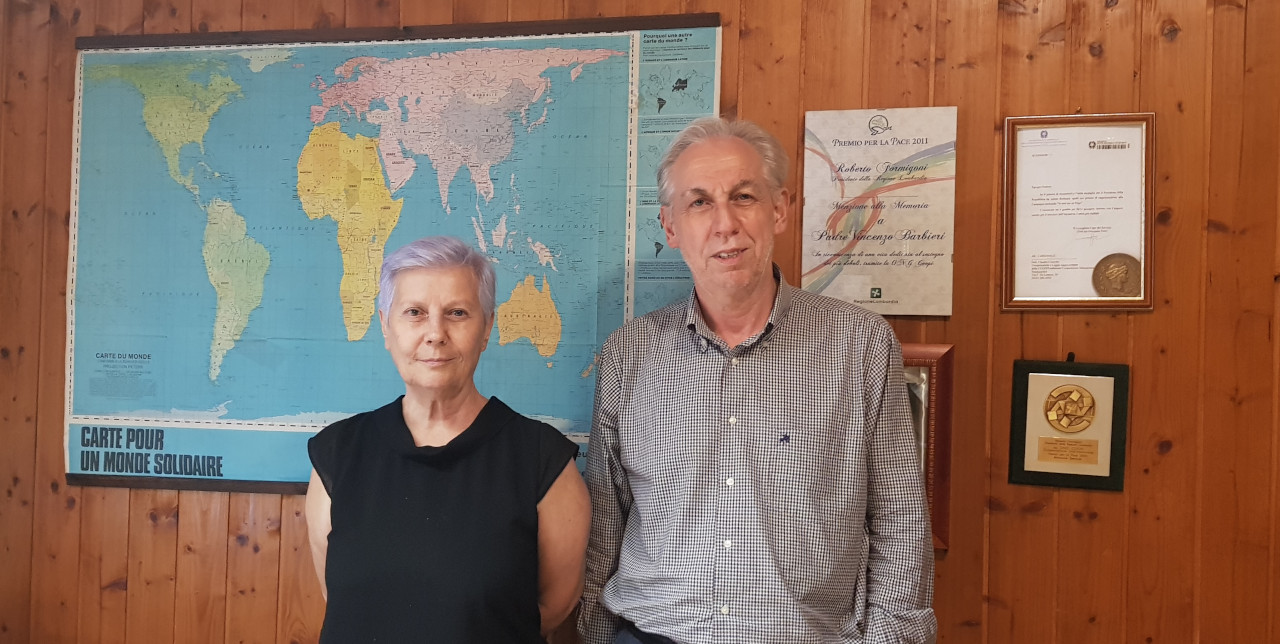 On Thursday 8 September, Morena Zucchelli, COOPI Head of Mission in Niger, visited the COOPI - Cooperazione Internazionale office in via F. De Lemene 50 in Milan. She met with Director Ennio Miccioli and later with colleagues from the other offices, with whom she works remotely on a daily basis. Her visit was an opportunity to talk about one of the countries in which COOPI concentrates the largest number of interventions: in Niger 27 projects are being implemented, involving 350 local and 20 expatriate operators, coordinated by the local offices present in the 8 capital cities of the country.

Head of mission since 2018, Zucchelli has seen the commitment of COOPI grow, which began its work in Niger treating children under five years of age from malnutrition. Subsequently, over the years, projects have been implemented that also work in Emergency Education, Mental Health, Food Security, Refugee Protection, and on to Disaster Risk Reduction, Youth Entrepreneurship and Basic Health.

With regard to basic health, thanks to mobile clinics and free distribution of medicines, COOPI ensures that populations, displaced by attacks or living in very remote areas, can avail themselves of medical care and examinations, thus meeting a basic need for the life of every human being.

Projects acting in the Environment and Disaster Risk Reduction sector in Niger prove to be essential year after year. Indeed, during the rainy season the country is hit by flooding of watercourses, causing damage to livelihoods, primary infrastructure, people.

With regard to youth entrepreneurship, COOPI implements projects focused on training young people and creating start-ups and small businesses in areas where, as there are not many job opportunities, the risk of being involved in illegal trafficking is high.

In Refugee Support, COOPI has been active in Niger since 2007 together with UNHCR within the ETM project. Every year, around four to five flights are organised by UNHCR with 150 people on board from Libyan detention centres. The asylum seekers and refugees receive health care and are accommodated in 'health and protection houses', where they receive physical and mental care to prepare them for progressive resettlement. Over the past two years, the number of people persecuted for reasons of sexual orientation and gender identity (LGBTQ+) has increased among the guests.

A number of projects in the area of food security include the creation of vegetable gardens in schools and health homes to ensure a constant and safe supply of food. In addition, a cash transfer system has been set up, whereby vulnerable people receive an electronic voucher enabling them to buy basic foodstuffs by supporting the local market..

COOPI began its action in Niger in 2012. In 10 years of activity, its work has steadily increased, both in the field of emergency response (COOPI participates in the coordination group of NGOs in the country's four conflict zones: Tahoua, Tillabery, Maradi and Diffa) and in the field of development, thanks to donors such as ECHO, OCHA, IOM, UNHCR, UNICEF, the European Union, Usaid and AICS.