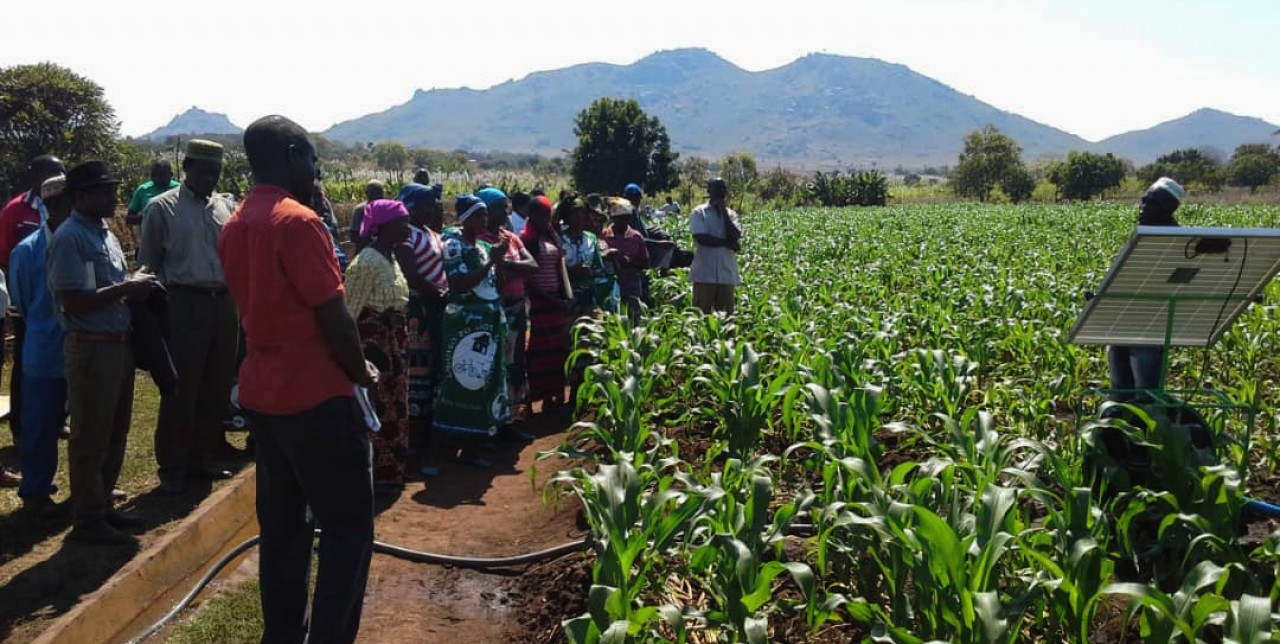 A large number of people in Malawi did not consider using irrigated agriculture until the effects of climate change showed up. The people of Mponda Misomali Village,Traditional Authority of Katuli in Mangochi, however, have now realized the good that can result from the use of this type of agriculture.

In 2016, as part of a project funded by AICS (the Italian Agency for Development Cooperation), COOPI has come to assist the Talandira farmers in the rehabilitation and expansion of the irrigation scheme that was established in 2011. The work done included animproved water intake point,improved irrigation channels and even the construction of a seed bank and a barn. The farmers were also equipped with three foot pumps to draw water from the irrigation canals of the vegetable gardens.

This intervention continued in 2017 as part of the new project "Strengthening the resilience of vulnerable communities in the districts of Salima and Mangochi", still funded by AICS.

According to the President of the irrigation scheme Rose Nali, the situation is currently positive: the members feel motivated and have taken ownership of the structure. The group started with 10 members in 2011, but has now grown to 21 members, of which 15 women and 6 men.

«After the first year of our irrigation farming activities, we made some profits and each farmer was able to buy their seeds and fertilizers. This encouraged us to do more in agriculture», said Rose Nali.

Through its second project, COOPI has provided additional equipment to the farmers of Talandira Irrigation Scheme: solar-powered pumps, which will minimize their manual labor. Head of village Mponda Misomali says: «The support from COOPI for the irrigation system has brought new positive steps. This was not the case before, and we are happy. Personally, I benefited a lot from the irrigation program: with the proceeds from agriculture, I was able to repair my house, I installed the concrete floor and I was able to send my daughter to secondary school».

Wandering around in the Talandira Irrigation Scheme, there is a healthy green corn on a half-acre field near the banks of Lipinda River. Its owner, Jeffrey Chimwala, is all smiling: he has realized that irrigated agriculture, if implemented seriously, can be a source of many good things for his family. Chimwala says he joined the irrigation scheme in 2016 and has seen several positive changes in his life since. He grows corn as well as sweet potatoes, cabbage and onions: «after completing my secondary education, I decided to devote myself to agriculture, with which I can support my family», says Chimwala, who recently sold about 9 tons of sweet potatoes.

Another farmer, Chrissy James, talks about the benefits that irrigated agriculture has brought her: «I was able to build a house with fired bricks and a tin roof. I plan to buy a bike: my goal is to improve my mobility», she explains, adding that she lived in a thatched house before the irrigation intervention.