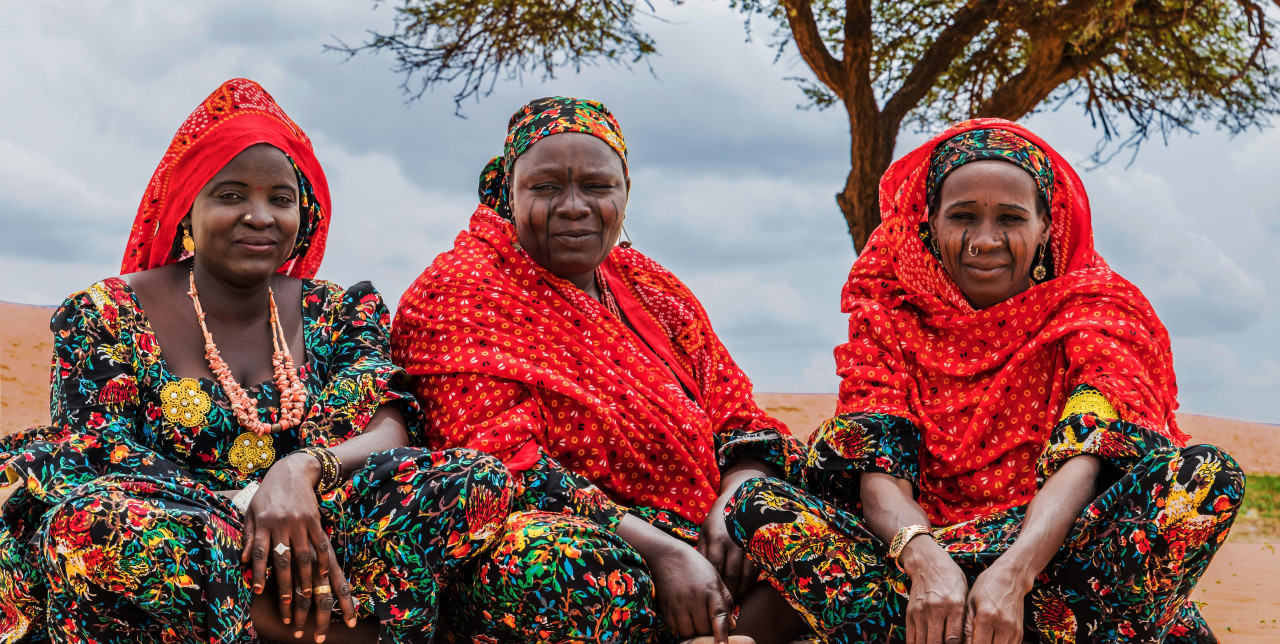 Niger. The other side of the coin

Boko Haram, gunfire, bombs, kidnapped children, raped women and girls, displaced people. This is what usually comes to our minds when we talk about the Diffa region, in Niger, in the Lake Chad basin. So many images and so many negative and dark scenarios that make us forget the positive and lively side of the region of Diffa, its population and in particular women, the beating heart of society.

COOPI - Cooperazione Internazionale intends to tell the other side of the coin, "History and traditions of Diffa from the point of view of its women", through the reportage of Apsatou Bogaya, a Niger photographer of great sensitivity.

This tribute to the culture of Diffa is possible thanks to the project “Promotion and right to education denied: a challenge for refugee(s), displaced children and adolescent(s) and private host communities of a safe and inclusive place for learning and for teachers in the Diffa region, Nige, funded by the Italian Agency for Development Cooperation (AICS), through which COOPI has invested in women's empowerment projects.

Diffa, “The City of Henna”

Diffa, called "The City of Henna", has a fascinating culture rich in traditional nuances. Henna is a small plant whose dried and powdered leaves are used as a dye for temporary tattoos on the body, especially on the hands and feet of women. It is a purely feminine practice that helps women feel more beautiful, thanks to the patterns that are drawn on their limbs every day. During celebrations and big ceremonies, women like to create much more complex and special designs. 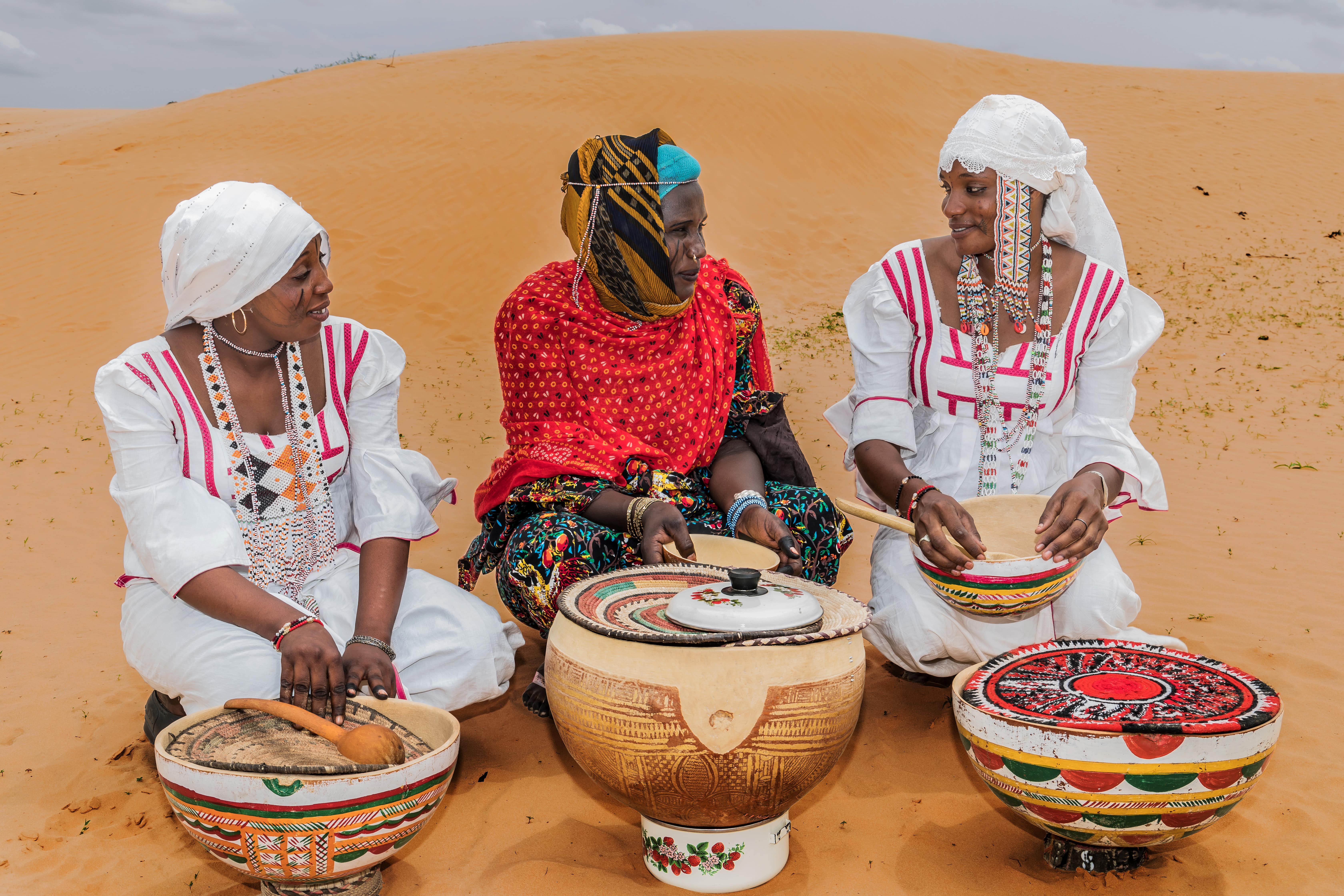 Paulh women in their typical black and white clothing handle traditional items passed down from mother to daughter.

Both in everyday life and on special occasions, the women of Diffa wear pagne, a type of fabric widespread throughout Africa, characterized by different patterns and shimmering colors. Kanouri or Beri Beri women (one of the ethnic groups most present in the Diffa region) are famous for their elegance and pride; hence the choice of the name Gana Kawa (eagle) for their pagne and Hadjia (return from Mecca) for their red veil. At the same time, Peulh women (another ethnic group present in the region) identify themselves in the white (Aborawa, in the Peulh language) or black (Hanagamba) color of their clothes, and are also known for their tradition of handicraft production.

Gold and silver jewelry worn by women symbolize wealth and power. Kanouri women wear large pearls, the Boukai, made from local minerals to make themselves more attractive in the eyes of their husbands; girls between the ages of 12 and 15, wear nose rings, the Kirzale, made from precious materials. 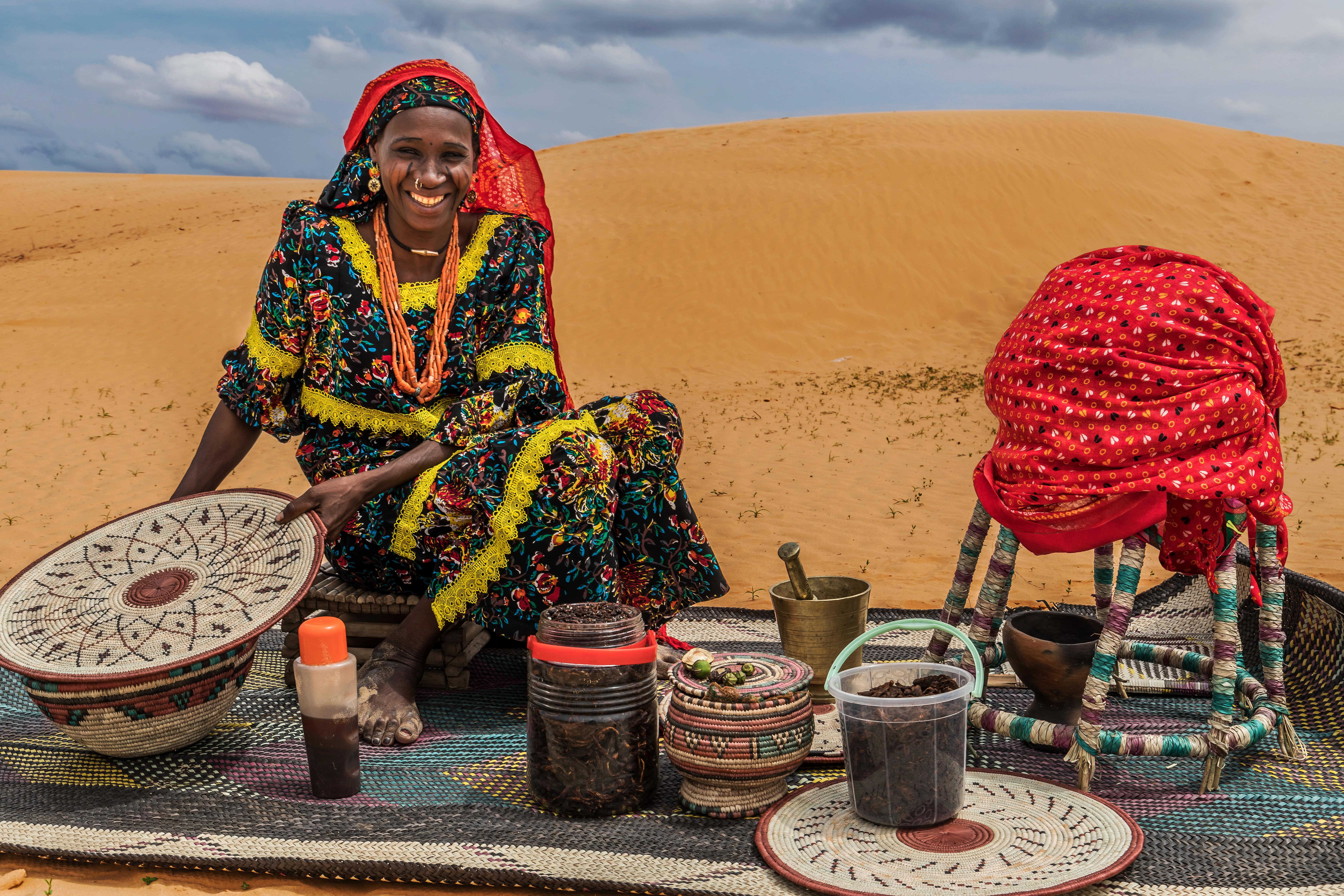 M.I. 35 years old, Kanouri, displaced person from Tam (Maine Soroa), trader of condiments and incense. In the photo you can see different tools such as the mortar and the censer where the incense is burned, which is represented here both in leaves and liquid.

The most common handicrafts are conical hats, leather stools and calabasses, typical earthenware containers. The latter are used to contain or drink sheep or cow's milk. The calabasses are decorated by hand; the colors are made by the men, sold at the market and bought by the women to personalize the containers according to the Peulh tradition.

The production of incense is also widespread in the region and women are dedicated to its production according to a traditional process remained unchanged over time. Each woman has her own secrets, handed down from mother to daughter, which allow the creation of unique essences and fragrances. The incense produced is then destined to be burned in small quantities in order to spread the scent inside the house.

In Kanuri tradition, the bride's trousseau always contains incense (Tafartché, Alhout, Gagap and Oumar, the liquid perfume) so that the bride and the room in which she is located have a pleasant scent. The quantity and quality of the incense in the trousseau will depend on the possibilities of the family, but there will be in all cases as provided by tradition. Also, according to Islam, its use is recommended for greater cleanliness and hygiene.

Fish at the heart of traditional cuisine 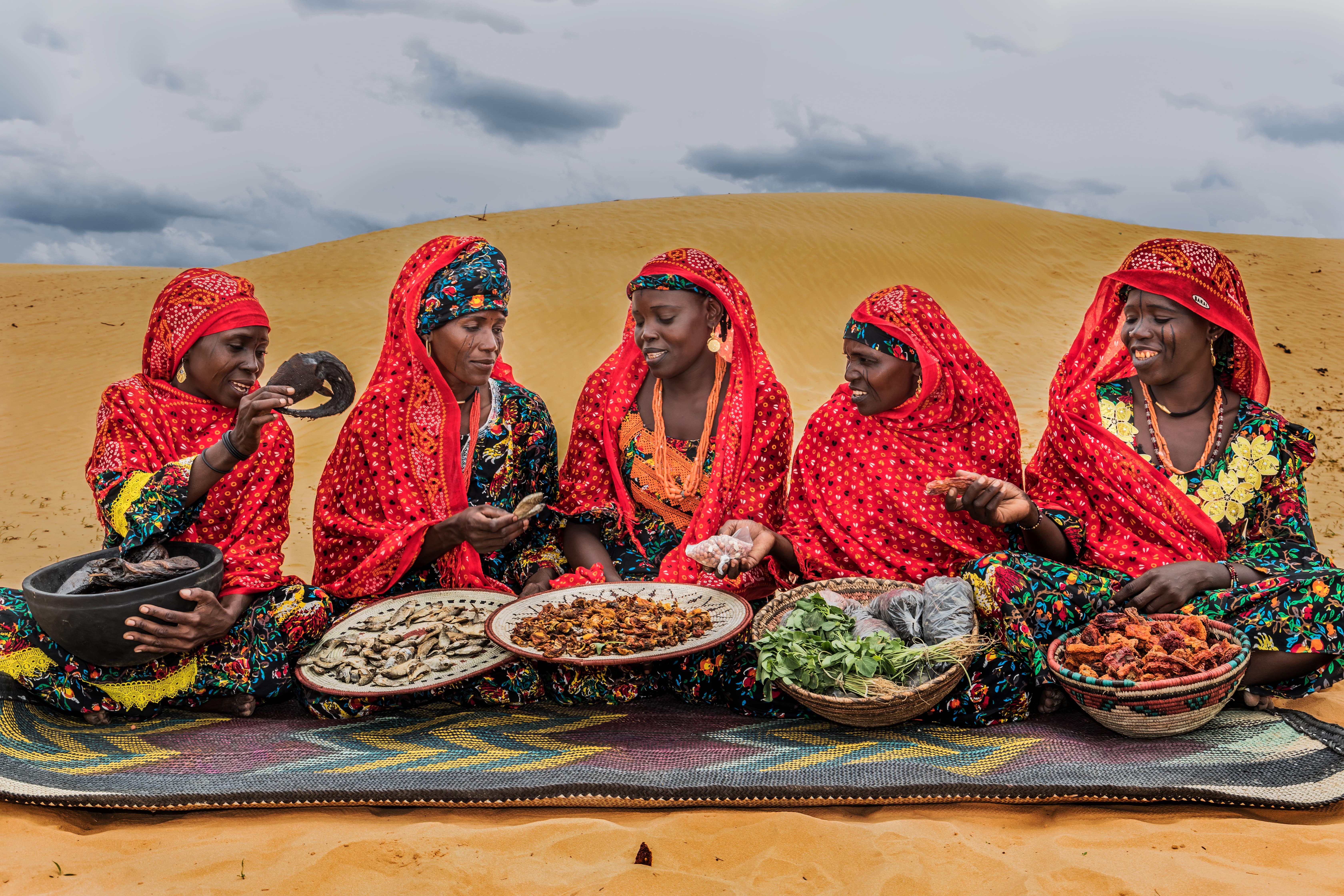 The cuisine of Diffa reflects many traditional African cuisines. Fishing and fish processing are economic activities of the region.  The most common fish species in the Komadougou Yobe River are carp (Ngaska in Kanouri language) and clarias (Koumoudou in Kanouri language). Most of the catch is processed into smoked fish on site by fishermen and then sold in the markets of Nigeria. The fresh ones arrive in small quantities to the women who transport and sell them in the town of Diffa. Early in the morning, the women crowd the different villages with their fish products and scatter around the city of Diffa, selling them door-to-door or in the main streets of the city.

The njitta, the red gold of Diffa, is a bell pepper cultivated in the Komadougou Yobé river valley and Lake Chad. It is mainly sold dried and used as a spice for the preparation of various dishes. It is largely exported to Nigeria.

A traditional recipe prepared with all the typical products is Brabousko, a dish made of corn or millet flour or both mixed together, accompanied by Karassou sauce, made of sorrel leaves, njitta and peanut paste. On festive days, women add smoked fish to the sauce to make it tastier.