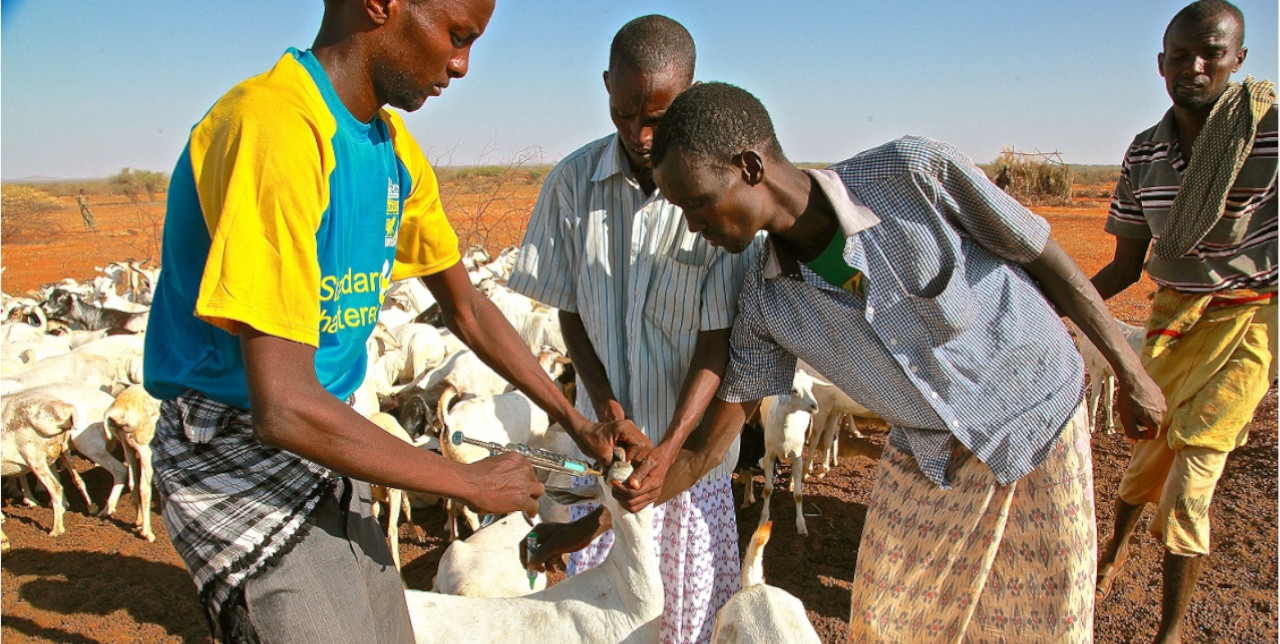 Somalia. Sanbur's farm has started over

Sanbur Ibrahim Durow, aged 39, is a father of 3 children (3 females). He lives in Dayah village, situated in Dollow District, along the Dawa River, in the south of Somalia. The village, home to hundreds of agro-pastoral families who largely depend on agriculture for their livelihoods, is one of the communities targeted under the project “Enhancing resilience in Somalia” financed by Australia Department for Foreign Assistance and Trade, implemented by COOPI in the framework of Somali Resilience Programme (SomReP).

Sanbur is a member of the Beercano farmer group established by 10 farmers which aims to improve food security in their community. Before COOPI’s intervention, Sanbur worked as a sharecropper in a farm 5 kilometres away from his village. Initially, he struggled to earn a living from this job. The yield was low, and this was attributed to a multitude of problems including the far distance away from the main water source (Dawa River), poor canal systems, lack of farm inputs (e.g. fertilizer, hybrid seeds and tools), fuel shortage, pest and disease, lack of farmer skills, and lack of proper market where to sell products. Above all, he was not comfortable working on his farm.

During the Gu season, the floods destroyed the crops planted and decimated the irrigation infrastructure. This was a major setback for him and pushed him towards adopting negative coping strategies such as incurring debts.

He says: “My production was only 5 bags (250 kg) of maize and 1 bag (50 kg) of beans before the training on good agriculture practices (GAP), and it only brought in an income of $ 125 per harvest, which was not enough to cater for the array of needs of my household. My destitution occasionally compelled me to borrow loans on numerous occasions which became difficult to repay with the household's needs outweighing the income I was making.”

In late 2018, COOPI selected 120 farmers from Dayah village. These received training sessions on GAP.  Sanbur was one of these: “I was fortunate to have been selected and enrolled in GAP training on land preparation. We were trained on spacing, making of composts, making natural insecticides to replace the chemicals I used to use. This helped me a lot in starting over. It helped me not only in restoring my farm but also because it gave me a variety of cash crops. COOPI trained us on the effective use of fertilizers, pesticides and the best techniques to ensure a good harvest, as well. Also, I was assisted with bush clearing on my farm which has helped open up 2.5 hectares on which I have planted a variety of food and cash crops. Now I have more farming land”.

During the last harvest, Sanbur reported improved yields. He affirms “During the last planting season I planted the maize and beans, as well as tomatoes and onions provided by COOPI. I harvested 15 bags (750 kg) of maize, 2 bags (100kg) of beans, 150 kg of tomatoes, 150 kg of onions, 110 pumpkins and 200 bales of Sudan grass that I sold in the market bringing in a total income of $1,735.  The income has enabled me to pay back my debts and has been enough for the family”.

He adds: “I also own 20 shoats who eats fodder produced from the maize plants. My animals have their food supply and my plants are no longer vulnerable to diseases as I have leant how to control the pests”.

He concludes: “I learnt a lot about farming practice, and I am planning to impart my knowledge on aspiring farmers in my community. I aim to make our village food secure for generations to come. Many thanks to COOPI, SOMREP and DFAT for the support”.

Access to food is imperative to the environmental, social, and economic well-being of society. With its intervention in Somalia, COOPI supports communities’ development providing tools which guarantee health, wealth and stability.