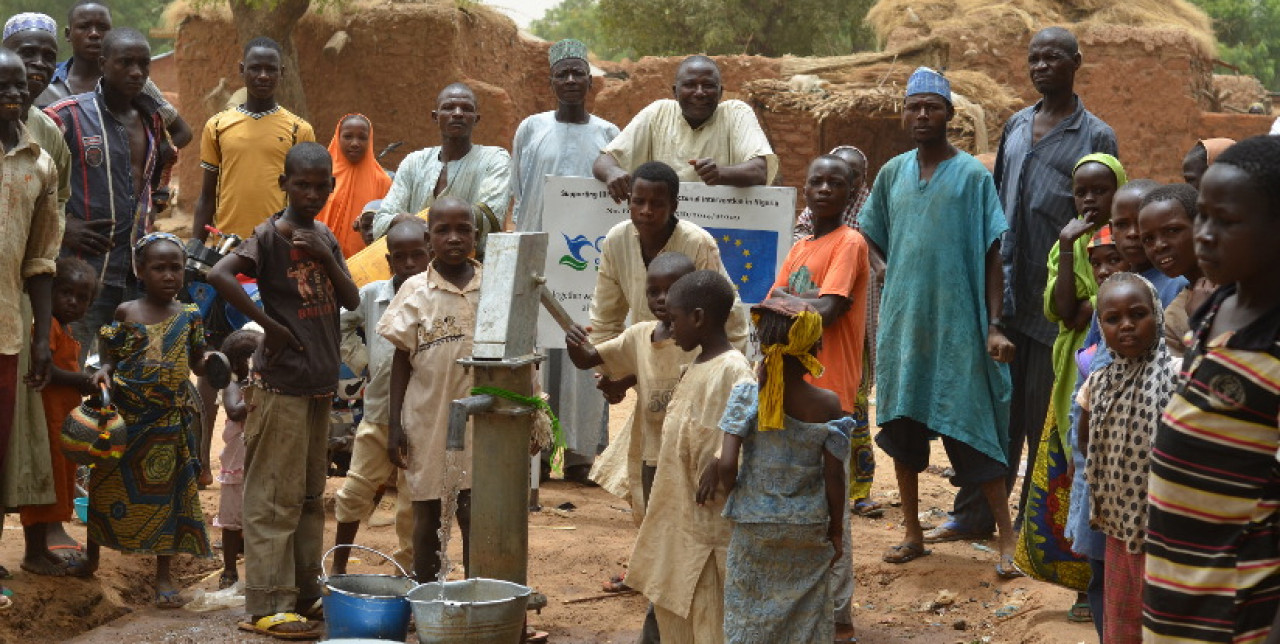 The humanitarian crisis in Nigeria

An interview with Marco Loiodice, cooperating with COOPI in Nigeria, recounted by Ambra Notari for Redattore Sociale.

ABUJA (Nigeria)- The estimated number of displaced people around the area of Lake Chad, including Nigeria, Cameroon, Niger and Chad, is of 2.700.000. Of these, 2.300.000 are Nigerians: almost 2 Million of these cases are evacuees due to the on-going conflict in the country.

"We have a humanitarian crisis which is disregarded by International communities and in which nobody takes an interest, if it wasn't for the role of Boko Haram". So says Marco Loiodice who has been cooperating with COOPI for 4 months in the African State: "what is happening today in Nigeria is very similar to what happened some years ago in Ruanda: during those times the West didn't move and didn't provide a timely answer". In Nigeria, COOPI carries out programs regarding nutrition and childhood protection, financed by Echo, the General Direction for Humanitarian Aid and the civil protection of the European Commission: "We are faced with famine and a break down in food. We try to do our best by distributing alimentary products, but the situation" especially for children - is critical, also due to the terrible hygienic conditions. Mortality rates have increased and we must not forget that many children have a past as child soldiers.

Today we see malnourished and displaced children on the road, escaping the violence caused by Boko Haram, with serious traumatic experiences behind. According to the data of UNICEF, extracted from "The UNICEF National Nutrition and Health survey", only 22% of the children are correctly breastfeed within an hour after birth and only 10% of the children from 6 to 23 months receive an appropriate diet including liquids, semisolids and solid food.

Something shifted a few days ago, consequently to The Guardians news publishing: Medici Senza Frontiere accuse ONU of not moving fast enough in responding to the warnings issued by Nigeria. If the military crisis ended in September 2015, as declared by the Nigerian government, then Boko Haram is far from disappearing, also, within the freed zones. At a humanitarian level, there are dramatic outcomes and devastating collateral effects. "Today Boko Haram is above all in the States of Yobe, Adamawa and Borno, in the North East of the country: the sad occurrences of the thousands of young women abducted are rising among the forests of Borno Chibok and Sambisa", continues Loiodice. COOPI supports 1.300 "hosting households" in Yobe: these operate as extended families that welcome refugees and displaced people voluntarily, providing shelter to children which have been forced to leave their families or which have been orphaned during their escape from the places directly affected by the conflict in the surrounding areas (60% of the refugees are underage in the State of Yobe).

Thousands of displaced people are received in refugee camps, of which most lack basic necessities: no water, no sanitary services and the constant risk of a cholera epidemic. "Those cooperating refuse armed escorts and many areas are still inaccessible to humanitarian aid. The Liberation Army discovers daily new graveyards in abandoned areas: victims of violence of Boko Haram but also of malnutrition". And if the conflict is to go on even only for two more months, "which it surely will" - the situation will become worse: "This is the rainy season and the farmers have to seed their terrains. If they can't come back to their lands, there will be nothing to harvest. And when somebody does come back home, he finds shepherds who benefit of the farmers' absence in order to graze their flocks on the fields. Because they fight for the same piece of ground, unfortunately gunfights between farmers and shepherds are not rare"

Meanwhile, the Nigerian government is occupied fighting against the terrorist organization on most of its fronts (who swore allegiance to Isis in March 2015). An adopted strategy is cutting livelihood pathways to and from the areas considered as occupied by Boko Haram: "Unfortunately, like this, inhabitants of the areas are isolated", underlines Loiodice. Within this conflict, the Nigerian anti-drug police has an important role by walking the ways of Viagra, which is greatly used by militants: "Their aim is to make as many women as possible pregnant. They believe that society will always reject these children because they are children of soldiers and for this reason they are relegated to the fringes of society. These children will see themselves as rejected and excluded and therefore destined to carry out their father's mission. In doing so, they believe in their madness to ensure longevity in Boko Haram".

According to Loiodice, hope lies in making the situation more visible by the mass media: "We know that there are not enough funds to react to all humanitarian crises. Additionally, the big agencies spend their funds on crises that receive greater visibility and have a bigger impact on public opinion. Unfortunately, what happens in Africa continues to be less interesting to wealthier communities. They only start to become involved when these tragedies turn into migrations".

So, how can we intervene?

"First of all, I believe that it is absolutely necessary to have "humanitarian corridors" that allow Nigerians to leave the isled areas and to defeat Boko Haram. Secondly, it is not only necessary to create activities of raising awareness, but also to involve "big actors" so that one can provide appropriate alimentary, agricultural and even psychological support. If we don't act immediately, some day we will wake up and we will read in the newspaper about thousands of dead people. We will read many messages and expressions of condolence, which are useless and too late".

COOPI'S project in Nigeria has been realized with the support of the General Direction for humanitarian aid and civil protection of the European Commission (ECHO).