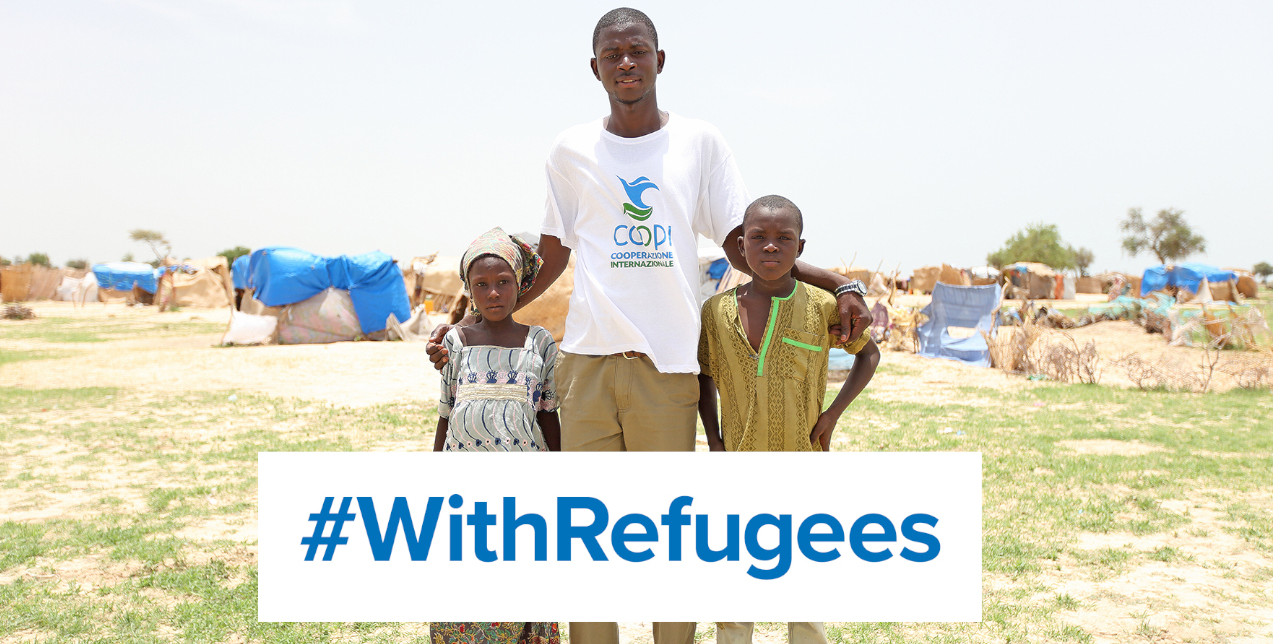 In 2018, 70.8 million people fled war and persecution – this is the highest number ever recorded by the United Nations Refugee Agency in the Global Trends report, released annually on June 20 th, World Refugee Day.

But who are these 70.8 million people? 25.9 million are refugees; 3.5 million are asylum seekers and 41.3 million are internally displaced people (IDP), who make up the largest group.

This figure doubled compared to 20 years ago and it does not include the more than 4 million migrants fleeing the Venezuelan crisis that is the largest exodus in the recent history of Latin America.

For 40 years, COOPI has been providing humanitarian assistance, offering protection, opportunities foreconomic development and strengthening food security to IDPs, refugees and hosting communities. In 2019 alone, we have been carrying out projects in the most vulnerable areas - from the Lake Chad Region to Syria, from the Horn of Africa to Peru dealing with the Venezuelan crisis, up to the specific crises on the border with Mali and within northern Sudan.

The Syrian crisis has exposed the most vulnerable people – including women and children - to a high risk of violence , resulting in an increase in child exploitation, school drop-out, forced marriages, human trafficking and forced recruitment.

Thanks to the OCHA-funded project "Protection of vulnerable groups in East Aleppo", we support 4,000 people among IDPs and hosting communities (1,328 men and 2,672 women). Since its launch in January 2019, the project has promoted awareness campaigns, established women's committees and satellite support centres throughout the country. This approach is contributing to easily reach the beneficiaries who are most exposed to violence, offering them psychological support and services aimed at increasing their resilience.

After years of conflicts, Somali refugees still have to deal with their devastating effects. Although many of them resort to undertake dangerous journeys, both within Somalia and to neighbouring countries, since 2014 there have been over 121,810 returnees, most of whom have settled around Mogadishu.

However, their living conditions are far from being safe or acceptable. COOPI has therefore taken action with the UNHCR-funded project "Strengthening the Market Access for PoC Entrepreneurs through Capacity Building and inputs provision in Mogadishu, Banadir Region" that will end in June 2019.

200 IDPs, returnees and member of the host community will benefit from training courses and grants to start a job, thus avoiding being involved in criminal activities or being victims of exploitation.

In collaboration with UNHCR, we are implementing the "Emergency Evacuation and Recovery Mechanism (ETM) in Niamey and Agadez: reception management (shelters, accommodation) and psycho-social support for asylum seekers and refugees" evacuated from Libya, in Niamey and Agadez.

This project aims to create safe shelters for 2,000 people (including 900 men, 300 women and 500 minors), who are waiting for the recognition of refugee status or to be resettled in another country. At the same time, we are supporting them with medical, psychosocial and educational care.

The village of Assaga is situated at almost 15 km east of the city of Diffa – here, 3,500 refugees from Nigeria are returning to school as part of the UNHCR-funded project "Support for institutional and community resilience, distance education and protection in the Diffa Region", which will last until December 2019.

Young boys and girls will access secondary and tertiary education by means of an e-learning platform in Distant Education Centres (DEC). To do so, we are relying on social housing where the most vulnerable families will be hosted and their institutional and community resilience will be strengthened.

We will also involve community members thanks to protection community relays, community health workers and community leaders to prevent and identify people at risk.

With refugees, the best solution is being able to return home voluntarily, in safety and dignity. Other solutions, however, include being integrated into the host community.

Following this logic, we are carrying out the UNHCR-funded project "Enhance peaceful coexistence between IDPs, returnees and host communities and promote sustainable reintegration of returnees and IDPs in Um Baru, Kornoi and Tina localities" in North Darfur.

Overall, more than 42,000 returnees, IDPs and host communities will benefit from improved food security, access to clean water and sanitation and problem-solving mechanisms.

Since January 2012, Mauritania has been hosting Malian refugees who fled due to political conflicts in northern Mali.

The Mbera camp, which houses 58,509 refugees, is located in the south-eastern part of Mauritania, in the region of Hodh el Charghi - an area characterized by very high levels of food insecurity, high vulnerability to climate change and lack of infrastructure.

Due to instability in northern Mali, refugees are still staying in the Mbera camp, thus putting a strain on the environment and the living conditions of approximately 24,000 inhabitants of the Bassikounou area.

To keep a peaceful coexistence with the host community, together with UNHCR, we launched the "Implementation of Income Generating Activities (IGAs) in the Mbera Refugee Camp and in the Bassikounou Moughataa (Mauritania)" project.

Our aim is to improve the living conditions and promote the self-sufficiency of 550 people (refugees and host community members) by creating 250 income-generating activities and micro-enterprises.

Four years ago, the constant deterioration of the socio-economic and political situation, the progressive restriction on human rights alongside an ever-increasing rate of violence and crime in Venezuela, have generated the biggest migration crisis and mass exodus in the recent history of Latin America - 4 million migrants, 820,000 of whom have reached Peru, now the second host country.

Since November 2018, COOPI has been offering first assistance and hygienic support to the thousands of Venezuelan migrants reaching in Peru from the northern border. Here, in collaboration with UNICEF, we have distributed hygiene kits, set up adequate spaces for washing and made children aware of hygiene best practices. With IOM, we offered an overnight stay to about 5,000 people in transit, while 5,000 migrants have already been helped to reach their final destination within Peru .

In 2018, the country collected 192,500 asylum applications from Venezuelan asylum seekers.