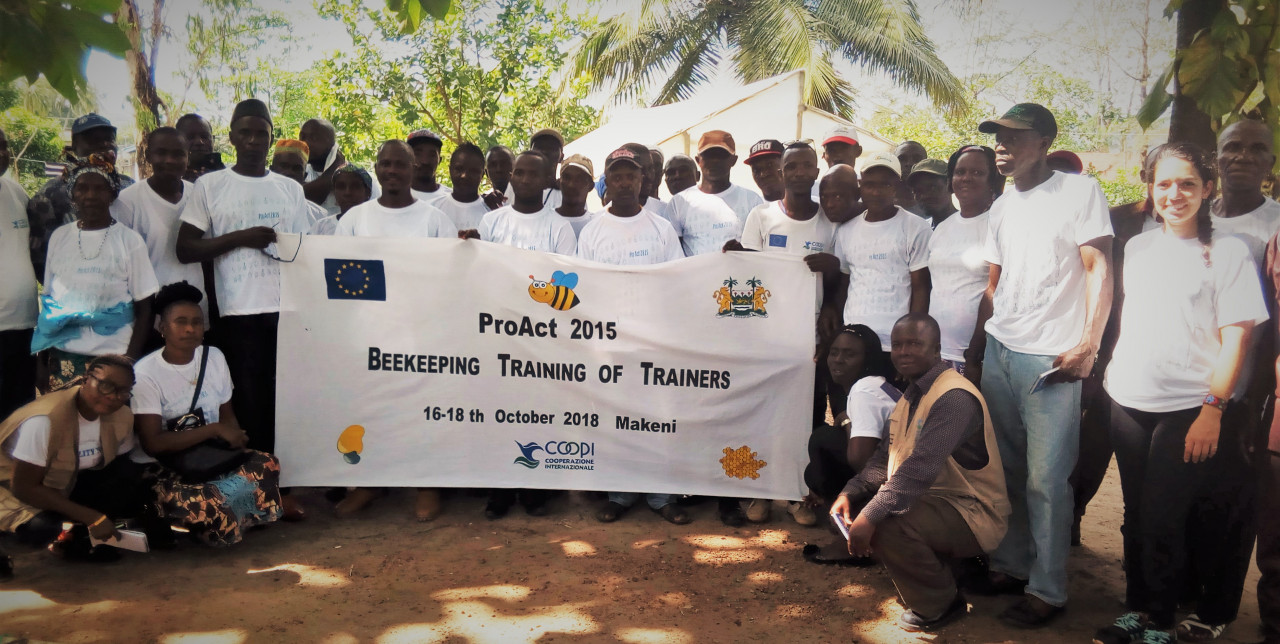 Under the operational framework of the European Union Funded Project ProAct 2015, the Italian NGO COOPI | Cooperazione Internazionale launched a training sessions on basic techniques of beekeeping management and honey harvesting to support the integration of honeybees into cashew orchards in the Northern Provinces of Sierra Leone.

As insect pollination alongside cashew farming is critical for the achievement of profitable yields, the introduction of honeybees into cashew orchards can play a vital role in enhance yields as well as offer alternative income generation opportunities for smallholder’s farmers. On the light of the boosting cashew sector in Sierra Leone, COOPI in collaboration with the respective regional offices of the Ministry of Agriculture and Forestry (MAF), conducted a three-day Training of Trainers session for selected extension officers and cashew farmers coming from ProAct project target districts.

The training aimed to enhance farmer’s knowledge and practical skills on beekeeping management and honey harvesting. The objective was to capacitate the attendees to train other farmers. The training also supported technical skills of local handcrafts operation for producing suitable equipment and tools to be distributed to beekeepers.

Speaking during the training session at the MAF in Bombali, the lead trainer, Dr. Kwame Aidoo who is a beekeeping specialist and the Director of the international organization Bees for Development based in Ghana, noted that the training is a big opportunity for Sierra Leonean farmers to be knowledgeable in the integration of beekeeping within cashew farming. He further acknowledged the conducive climate condition together with the proper land system available in Sierra Leone and that there exist lots of potentials from which local farmers could benefit. “This practice would enable bees to pollinate cashew flowers which would lead to a yield increase of about 200% of cashew nut,” he poised. He continued that despite the knowledge of some local farmers in honey production especially in the Konaidugu District, emphasized that most local farmers are not adequately informed with information regarding this new concept to be integrated in cashew farming. He advised the trainees to adopt the right skills and pass them on to other farmers.

Mrs. Elizabeth Abie Kamara, Block Extension Supervisor and Gender Officer from the MAFFS in Bombali, underscored the importance of the training, noting that it would enable local farmers to enhance their capacity in honey production and improve the productivity of cashew trees. She furthered that farmers would benefit to practice an activity oriented mainly to export. She appealed COOPI to continue with the training program for local farmers in order for it to be sustainable.

Abdul Karim Bangura who happens to be one of the trainees said the training has been a value addition to cashew farmers in the three Northern Districts. He maintained that the integration of beekeeping with cashew farming is a profitable business, adding that if properly managed by colleague farmers it would increase their profit margin and more importantly, it can transform their lives. In line with this, he encouraged colleague farmers to embrace the new concept so that they could have higher yields of cashew nut and good quality of honey production.

The training concluded on Thursday 18th of October and it addressed to 45 participants, including COOPI field mobilizers, MAF extension workers and cashew farmers from the districts of Port-Loko, Kambia, Bombali and Koinadugu.