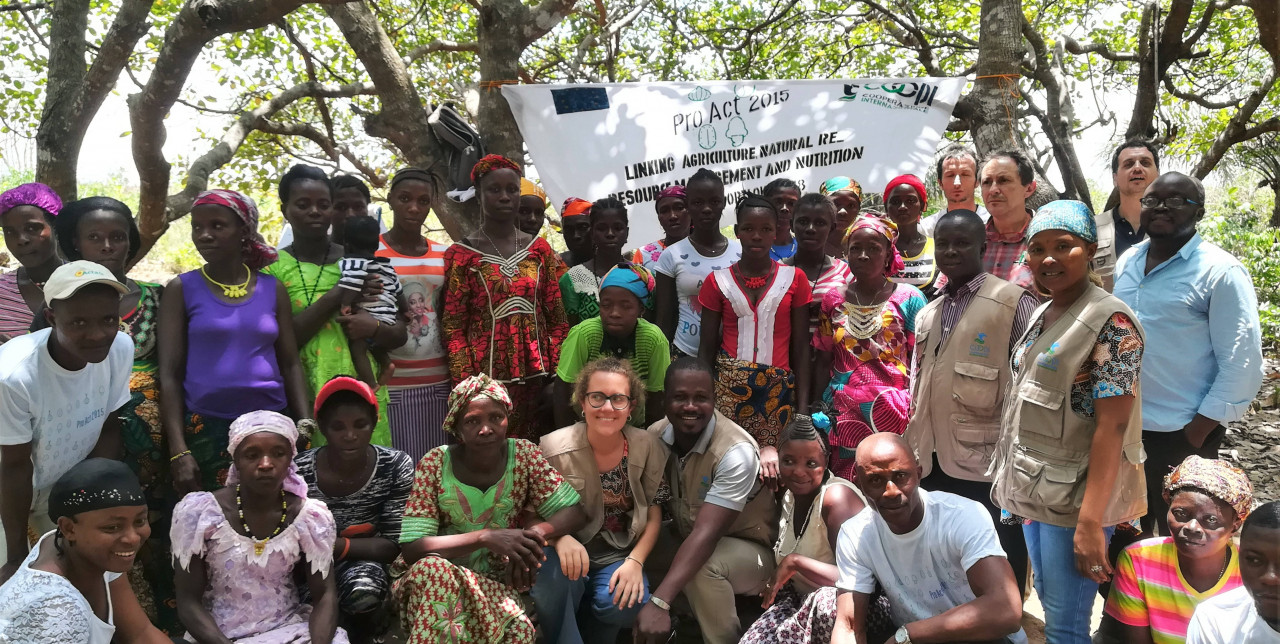 On the 24th and 25th of April 2018, two representatives of the Rural Development and Food Security Unit of the European Union delegation in Sierra Leone, Mr. Philippe Gatineau and Mr. John Christian Abu-Kpawoh, visited the operational areas of COOPI and Inter Aide in the northern provinces. The visit was specifically organized to assess the ongoing activities under the ProAct 2015 project that is financed by the European Union and is carried out by a consortium of three organizations, namely:

Besides supporting cash crops value chains, WHH and COOPI are also implementing a nutrition campaign named LANN (Linking Agriculture, Nutrition and Natural Resources) that aims to valorize local knowledge and improve the understanding of the value of certain food crops and the benefits they can provide to health, particularly that of women and children. 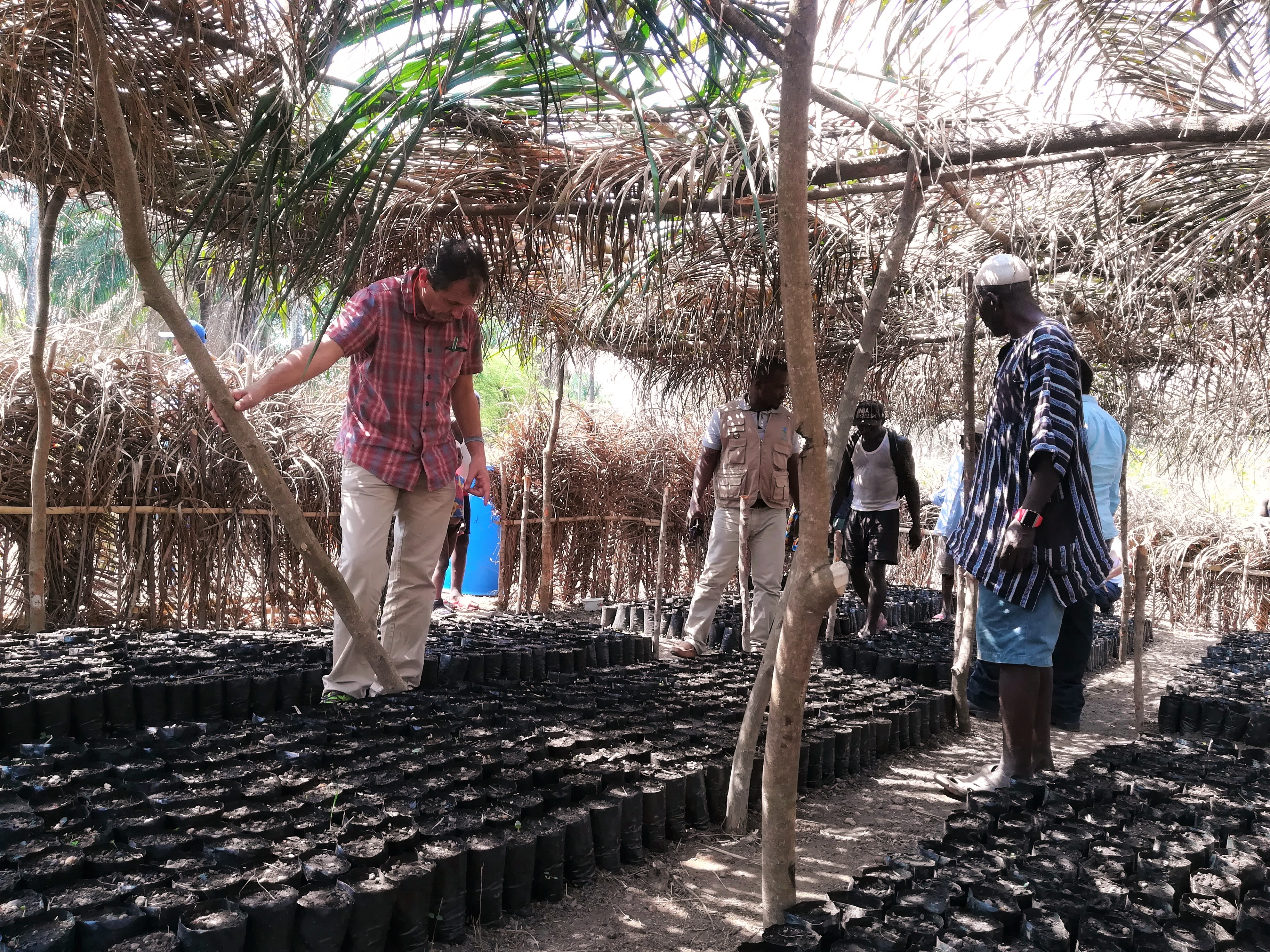 The visit started in the morning of Tuesday 24th of April in Port-Loko district. The two representatives from the European Union delegation, accompanied by COOPI Head of the Mission in Sierra Leone Giacomo Mencari, visited Makonteh village in Maforki chiefdom, where the COOPI Nutrition Team was facilitating a LANN session with groups of women. The session was attended by 27 partecipants from the cashew farmers households.

The women trainees welcomed the visitors by dancing and singing traditional songs.On behalf of the European Union delegation, Mr. Abu-Kpawoh, Project Officer for Rural Development and Food Security, encouraged the female participants to put effort into learning, to take advantage of the technical skills acquired and to put them into practice in their daily challenges in order to improve their community.

Team Leader mr. Gatineau raised several questions to COOPI LANN trainer Mrs. Naomi Ramatu Koroma concerning the approach, the methodology, the selection of beneficiaries and the measurement of outcomes. The visitors had lunch together with the beneficiaries afterwards.

After lunch, the visit carried over to Matekgry village in Makari Gbanti Chiefdom, Bombali District. The European Union delegation and ProAct project team visited a cashew nursery where the farmers had recently sowed 9,000 cashew seeds. The nursery is being managed by Gbonkin Famer Based Organization (FBO), which is made of 25 members supported by ProAct project in cashew cultivation. The visitors had the opportunity to hold an interactive discussion with farmers about the current situation of the cashew sector in the region. The visit then moved to an already established cashew farm in order to allow the visitors to contemplate different stages of cashew cultivation supported by different project phases, including the previous European Union-supported intervention "Agriculture for Development" (A4D). After that, farmers showcased ProAct-supported activities of integration between cashew orchards and beekeeping.

As the last step of the day, the delegation made of European Union representatives, COOPI and Inter Aide visited the District Agricultural Officer (DAO) of the Ministry of Agriculture, Forestry and Food Security (MAFFS) in Makeni. During the meeting, Mr. Gatineau introduced the purpose of his mission, illustrated European Union strategies on agriculture development and food security in the northern provinces of Sierra Leone and asked questions about the relations between partners of the project, the local MAFFS and the coordination tools in place. The meeting and the day visit ended in a friendly way. 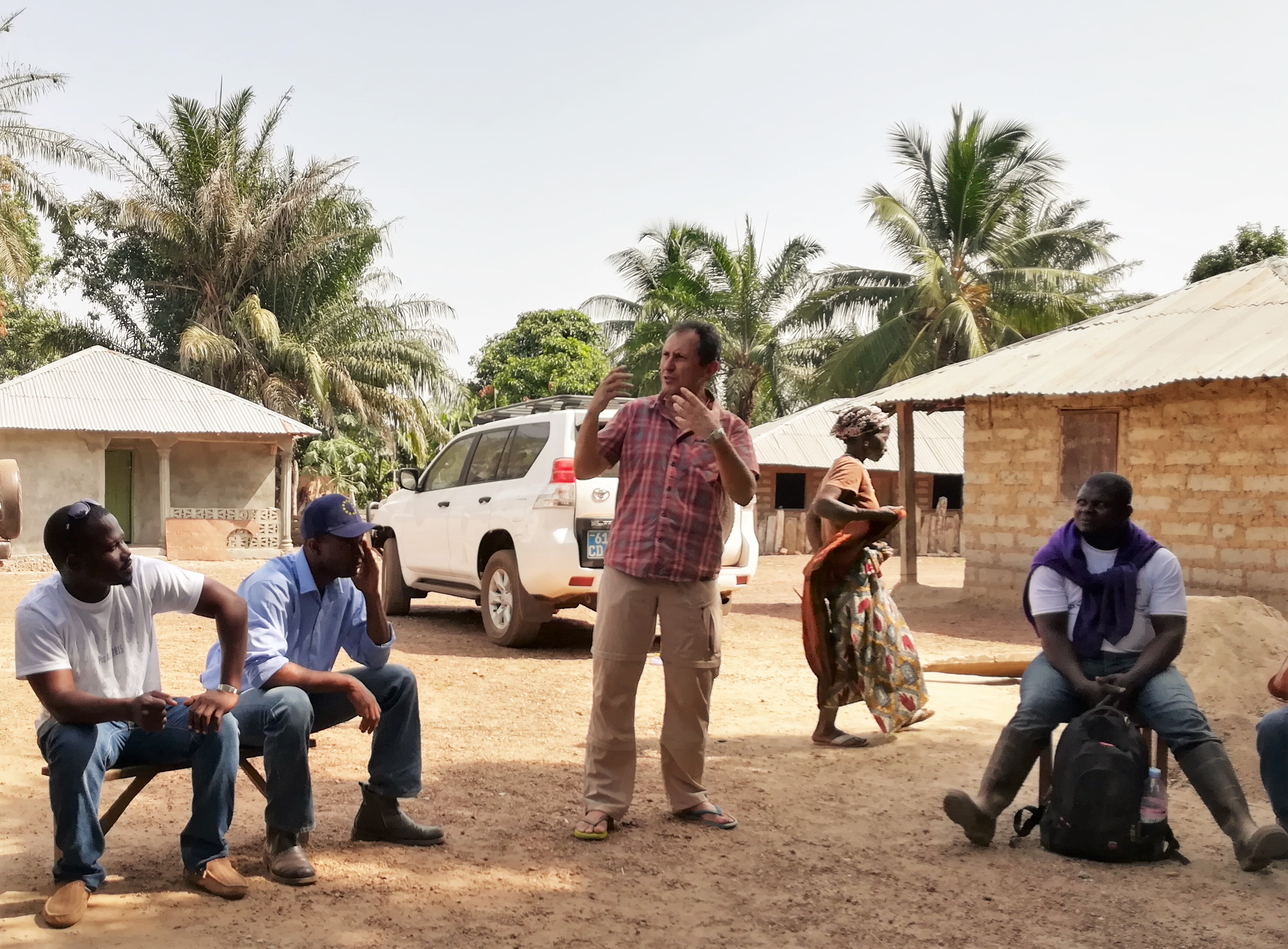 During the second day of the visit, ProAct partners and the EU delegation met at the Inter Aide office in Makeni, where the Inter Aide team illustrated and defined the meetings of the day. Shortly after that, the convoy headed to Lohindi Village in Gbendembu Ngowahun Chiefdom, Bombali district. Inter Aide Water and Sanitation (WASH) team displayed a hand pump facility built under ProAct in 2017. Inter Aide technicians illustrated the different phases of the community mobilization process, excavation operations and procurement procedures. Special emphasis was given to the setting up of the community committee, which is responsible for the maintenance of the infrastructure and to ensure the suitability of the installation.

The visit then focused on the ProAct livelihood component of Inter Aide, moving to Kambia Matash village in Makari Gbanti Chiefdom to observe vegetables plots under dry cultivation. The plots were farmed with assorted vegetables such as onions, okra, garden eggs, cucumber and maize. The farmers had the opportunity to illustrate the marketing strategy introduced by Inter Aide in order to share information about produce prices at the local markets.

The second part of livelihood component detailed the innovative approach on palm oil-processing facilities. Inter Aide introduced new model of pits for the extraction of oil from the palm fruit.

Debriefing from the EU Delegation